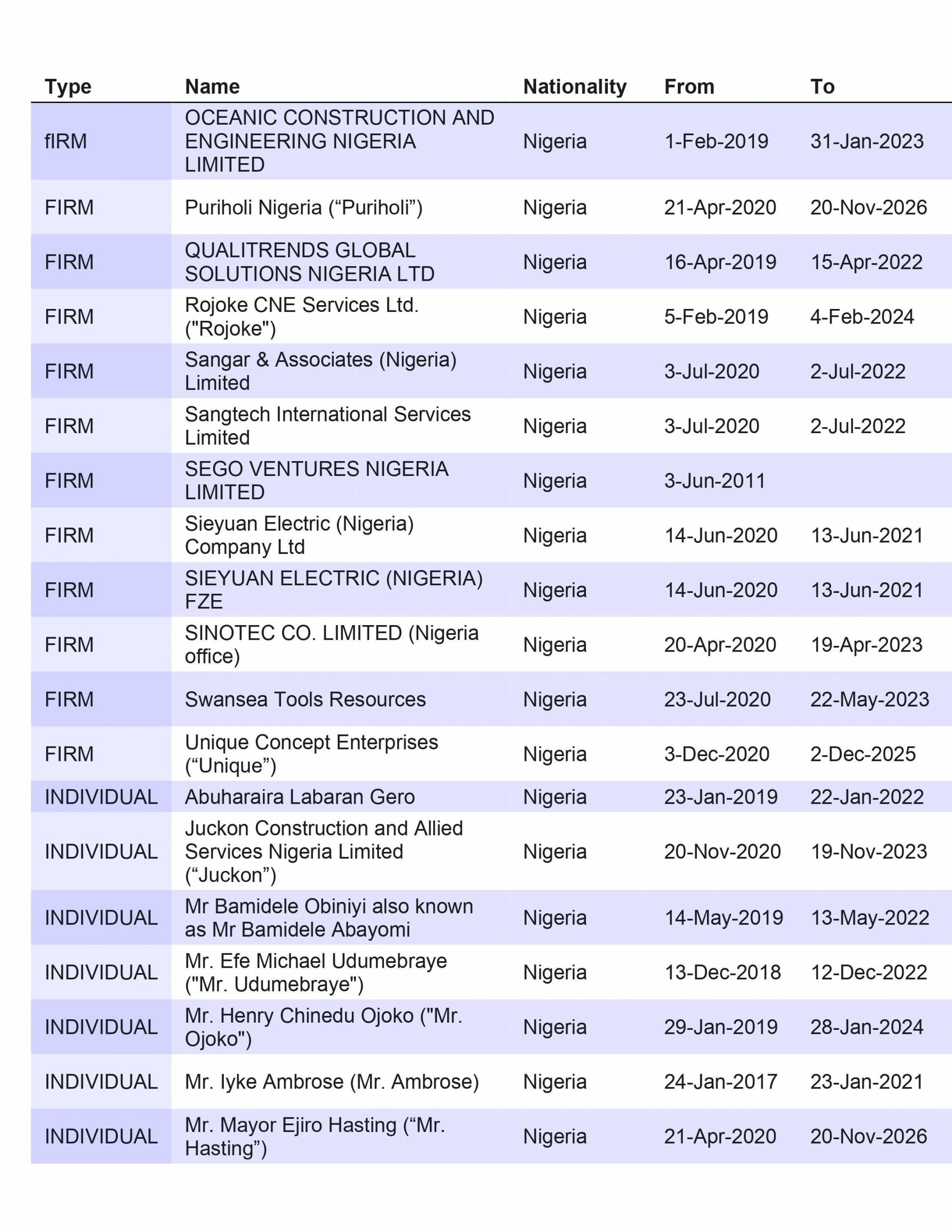 The World Bank in its Notice of Indictment No. 578 published on its website said the period of ineligibility for Asbeco extends to any legal entity it may directly or indirectly control. “The minimum period of ineligibility is the five-year period indicated in the posting.
However, the Bank noted that after the minimum five years ineligibility period, Asbeco may be released from ineligibility only if it has demonstrated to the World Bank Group’s Integrity Compliance Officer that it has complied with the following conditions, (a) taken appropriate remedial measures to address the sanctionable practices for which it was sanctioned; and (b) adopted and implemented, in a manner satisfactory to the Bank, integrity compliance measures as may be imposed by the Bank Group’s Integrity Compliance Officer to address the sanctionable practices.
The Notice of Uncontested Sanctions Proceedings No. 675 of May 25, 2021 signed by the Chief Suspension and Debarment Officer, Office of Suspension and Debarment (OSD) of the World Bank, Jamieson Smith, linked Asbeco to International Development Association (IDA) Credit No. 5105-NG in respect of the Nigeria Erosion and Watershed Management Project; IDA Credit Nos. 6277-NG and (SUF) 6278-NG (additional financing for the project).
The company was accused of paying N2million to the Project’s Engineer and another N50,000 to the Project’s Cashier to influence their actions in connection with the procurement and/or execution of an erosion control contract
Similarly, Maxicare was sanctioned by the Bank on the basis of its cross debarment from the African Development Bank (AfDB) over similar infractions.
On April 28, 2021, the AfDB announced a 36 months debarment of the company with effect from February 23, 2021 for allegedly engaging in “collusive and fraudulent practices during a tender for the construction of weigh stations and supply of equipment under the Transport Facilitation Programme for the Bamenda-Mamfe-Abakaliki-Enugu Road Corridor connecting Cameroon and Nigeria.”
The Transport Facilitation Programme co-financed by the AfDB, an entity of the AfDB Group was aimed at increasing trade and strengthening cooperation generally between the countries of the Economic Community of the Central African States and those of the Economic Community of West African States (ECOWAS) and between Cameroon and Nigeria in particular.
With the debarment, Maxicare and its affiliates would be ineligible to participate in World Bank Group-financed projects during the debarment period, apart from cross-debarment sanctions by other multilateral development banks under the Agreement for Mutual Enforcement of Debarment Decisions, including the Asian Development Bank, the European Bank for Reconstruction and Development, the Inter-American Development Bank and the World Bank Group.
However, at the expiry of the debarment period, the Bank said the company would only be eligible to participate in World Bank Group-financed projects on the condition that it implements an integrity compliance programme consistent with the Bank’s guidelines.