Nigeria public debt profile is growing exponentially against the country’s plans because of the impact of several global events beyond the country’s control, the Minister of Finance, Budget and National Planning, Zainab Ahmed, has said.

The Minister who spoke on Tuesday while receiving the Deputy Secretary-General of the United Nations, Amina Mohammed, in her office in Abuja, identified three unrelated global events that triggered the decision by the present administration to borrow and accumulate more debts than it planned.

“Our country, like most developing economies, is faced with debt service obligations. Because of the impact of the COVID-19 pandemic, we had to take on more debts than planned.
“After the COVID -19, the war in Ukraine with Russia, several global events not caused by us, even the climate incidents made us to borrow more than we planned. And then to complicate that, because of the quantitative easing advance that central banks had to do, there’s high inflation, and also high interest rates from borrowing from international finance institutions,” the Minister told Ms Mohammed.

Lamenting over the impact of the high interest rates on loans, the Minister said: “If Nigeria goes out today to borrow at the international capital market, the market punishes us with very, very high rates.
“This is because we don’t have any buffer or any risks mitigating mechanisms that will reduce our cost of borrowing in international markets, whereas European countries that don’t have strong fundamentals as Nigeria will borrow at much lower rates,” she said.

The Minister called for global support from international organizations like the UN, for African countries, to provide mitigating mechanisms they would have recourse to, to reduce the cost of borrowing at the international capital market.

Apart from the high interest rates Nigeria have to borrow from the international capital market, the Minister said the country has a lot more difficult circumstances to cope with despite doing its best to survive.

One of such difficult situations, she pointed out, was the attitude of credit rating agencies who continue to base their assessment of the country economic performance on indices, despite the series of changes impact the global economy.

“The credit rating agencies are working as if nothing has changed, not realizing the kind of exogenous shocks that we are grappling with. They assessing us and downgrading us for characters that are external to us, even when we’re putting our best efforts,” she said.

This situation, she noted, appears beyond the country’s capacity to change, as her ministry had done everything necessary, including structured virtual and physical engagements with all the credit rating agency, to provide information about their questions on the Nigerian economy.

The Minister said it was obvious the country would require intervention from some global support agencies get these credit agencies to do things differently.
“They cannot be making the same kinds of assessments they were making on the country when things were different when things are not normal anymore. Some of our countries are really hurting by the assessment of the credit rating agencies.

“This year alone, Nigeria has been downgraded one notch too many. Unless these interventions are done at a very high international level, developing economies will be the ones that will continue to carry the brunt of this bad attitude by the credit rating agencies,” Ahmed said.

The Minister who used the visit to present the score card of her Ministry to the diplomat highlighted the achievements in terms of internal security, food security, good governance, law and order, infrastructure development, institutionalization of annual Finance Acts to support domestic revenue mobilization, debt sustainability and innovative approaches to infrastructure finance.
The Minister who thanked Ms Mohammed for her support to Nigeria, by helping clarify the various sources of financing for its Sustainable Development Goals (SDGs), acknowledged the support from the United Nations Fund for Population (UNFPA) to the National Population Commission toward realizing the national census plan.

Apart from UNFPA deploying an embedded special advisor to work with the NPC, the Minister said since President Muhammadu Buhari made a proclamation for the census to be held in April 2023 after the elections, Nigeria required the support of the United Nations for the financing of the exercise.

“The financing of the census has been very tasking on the government budget. We have largely funded all of the enumeration processes, trial census and the first round of equipment. We were told that once proclamation has been made, funding from external sources will begin to come in. Now we have an election, which involves very high spending, and also a census involves very high spending too. So, we really do need these interventions now and urgently,” she pleaded.

Noting that the approval of the SDRs in 2021 came on time to help Nigeria’s recovery efforts from COVID-19 pandemic, the Minister expressed concern over the delay in carrying out the redistribution of the SDRs to developed countries.

She asked the UN and other international organizations to support the effort to expedite the process towards the release of the funds.
On financing for transition energy, although recent COP27 summit ended with commitments on adaptation and mitigation of environmental protection, the Minister called for support for Nigeria to finance its energy transition plan.

The plan, the Minister said, is a detailed document designed to drive investment in the development of gas resources to attain energy sufficiency by 2030, and net zero emissions by 2060.
Regardless, the Minister said although energy transition was important, the people must not only be made to survive, but also to have a better livelihood than they have now.

Despite commitments to fund investments in gas for domestic utilization and development of the economy locally, the speed towards actualization was slow, and would require the support of UN to realize. 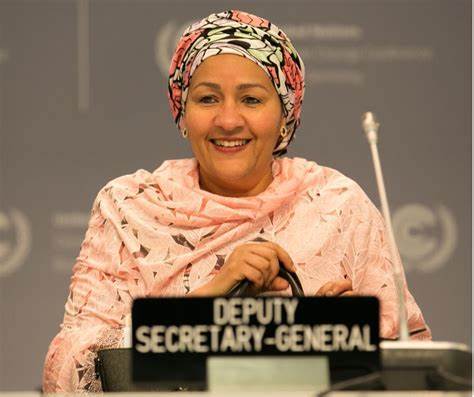 Earlier, the Deputy Secretary-General highlighted the impact of the current global energy crisis in terms of loss of lives, food security, energy supply and finance.

Apart from rising inflation in Europe, she identified rising debt as the next crisis, saying the United Nations Development Programme (UNDP) has already reported that over 50 countries on the “debt row” were in danger of not being able to meet their commitments through no fault of their own.

These three crises, Mohammed noted, were not caused by the emerging markets and developing economies, who are now left to deal with the repercussions.
In Nigeria, she expressed happiness that the growth prospects have improved significantly, as a result of a more robust recovery programme she described as impressive, especially in the non-oil sector of the economy, as well as rising global crude oil prices.

Despite the improvement, the UN diplomat observed that the fiscal situation in the country was still tight, as the government was unable to expand the fiscal space to attain its development goals.
She expressed delight that the meeting with the Finance Minister was an opportunity for them to discuss areas the UN could further support the country’s recovery efforts.

On the planned removal of subsidy on petroleum products next year, Mohammed said although the timeline for the implementation was “hugely important to the economy” and commendable, there was need to exercise caution, to saving from the exercise were utilized for the benefit of the people.

“Government should ensure that those perceived gains from subsidies removal are actually going to translate into the improvement of the lives of the people and work towards reducing poverty, ensuring young people have jobs and are made an integral part of what the government is doing,” she said.

On 2023, the DSG identified several programmes on the UN calendar, including the SDG Summit, to take stock on the progress in terms of commitments to financing of development programmes; the health summit, to review the Universal Health Coverage, particularly on tuberculosis and the response to the pandemic, and the global energy transition agenda, to review the progressing to meet the net zero commitments.

Although there was a good energy transition plan from Nigeria, she said there was a need to find the resources from the international community to implement it, particularly for renewables.
She emphasized the importance of domestic budget to achieve these goals, in addition to the support from regional and international financial institutions, leveraging on the support of the public and private sectors.

Although Nigeria accessed the special drawing rights from the $600billion approved through the International Monetary Fund (IMF) and the World Bank to help developing economies to tackle the impact of the global pandemic in 2021, Mohammed said discussions were still ongoing to redistribute the SDRs.

“This is going to become more necessary, as is many other instruments the IMF and World Bank have to try to help us move forward. But suffice it to say there will be much to access as we go through next year trying to achieve the development goals trying to reinforce many economies,” she said.

On the national election planned for next February in Nigeria, Mohammed said this would be a costly exercise the international community, including the UN, would commit to support.