Dangote Group says its decision to be building concrete roads in the country as part of its Corporate Social Responsibility (CRS) was to ensure the government was spared the problem of undertaking repairs of a completed road after just a few rainy seasons.
,
President of the Dangote Group, Aliko Dangote, who spoke at the opening of the 43 kilometers long Obajana-Kabba road constructed by Dangote Industries Limited (DIL), said concrete roads would save the government the headache of road repairs and maintenance every other year.

Also, concrete roads, he said, was part of the company’s plan to revolutionize Nigerian roads with concrete, to ensure that resources used in road repairs and maintenance were deployed to provide other more important needs of the nation.

“We are going to be building concrete roads in the country so that anytime we build a road, we do not have to go back to repair after the third raining season, but move on and use the resources to address other pressing needs of Nigeria,” 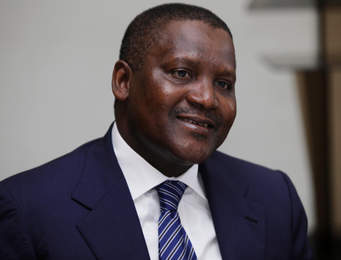 Described by motorists as the country’s most strategic highway that is aiding travelers between the North and the South, he said the road has now become one of the busiest roads linking the two regions in the country.
The Project Director, Olatunbosun Kalejaiye, said he was excited that the Corporate Social Responsibility Project is being delivered for use by Nigerians, adding that while the rigid pavement has been completed, the company was dressing the shoulders.

Site Engineer, Samuel Obosi, assured that the dual carriage way would be durable and less susceptible to potholes and repairs like asphalt roads, adding that it would reduce the rate of road accidents in the country.

“Thank God it is a concrete road. It can withstand any heavy-duty vehicle,” Lamidi Sikiru, a driver, said.

A member of the National Union of Road Transport Workers, John Moses, said his taxi business was booming compared to when the road was very deplorable with potholes and barely used by motorists.

A community leader of Apa Bunu Kingdom and spokesperson for the community, Sam Omosayil, commended the Dangote Group for undertaking the project, saying the road has attracted a lot of businesses along the way.

The Bajana of Obajana Land, King Idowu Senibi and other traditional and community leaders eulogized the President of the Dangote Group for completing the road, describing it as gigantic and the first of its kind anywhere in Nigeria.

“Dangote is our son. We would protect his huge investments and gigantic concrete road. I am happy that this is happening in my lifetime and in my Kingdom. This is a great opportunity for us and many generations to come.

“Our society will be opened as you can see vehicles and commercial activities have started coming up. May God Almighty bless Dangote and all his staff,” the traditional ruler said.

Also, the traditional head of Akpata Land, Frederick Durojaiye Balogun, said his people were very proud of Alhaji Aliko Dangote, adding that the Dangote Cement, Obajana plant, which is the single largest cement plant in the world, has brought honour and respect to their Kingdoms.

“His presence has brought a total turnaround in our lives. Also permit me to appreciate the Federal Government for this joint effort. We are very grateful,” he said.

The King of Okebunku Land in Kabba Bunu Local Government, Timothy Omonile, commended the President of the Dangote Group for his selfless contributions to the socio-economic development of the community.

He charged other philanthropists to emulate his kind gesture, adding that is the only way Nigeria can develop its economy and infrastructure.

He said the construction of the road has helped cut down the rate of criminality in the state, describing the Group President of Dangote Group Aliko Dangote as God sent to the community and its people.

A businesswoman, Rechel Olatunji, said she has been making more money since the road was completed, because more people like to ply the road to pursue their businesses.

Another businesswoman, Veronica Samuel, prayed God to continue to bless and keep the Dangote Group, adding that the new road has changed her life and her people, particularly her children who ply the road every day to school.

The road is the second of the concrete roads undertaken in the area as part of the Dangote Group’s Corporate Social Responsibility (CRS) in its community of operations.

At the commissioning, the Minister of Power, Works and Housing, Babatunde Fashola, noted that the strides by the Dangote Group demonstrated the unwavering commitments of an indigenous investor towards the industrialization of Nigeria.

“Concrete roads last longer than asphalt roads and do not have potholes. It does not require frequent maintenance as asphalt roads. It saves fuel for motorists and protects tyres from wear and tears,” the Corporate Communications Department of the Dangote Group explained in a statement,

The company said it was part of the Group’s determination to support government and the Nigerian people in order to grow the economy and facilitate ease of doing business in the country.