The Presidential candidate of the ruling All Progressives Congress (APC), Bola Ahmed Tinubu, risks disqualification from the February 2023 race following fresh allegations of perjury, identity theft, and criminal forgery against him.

Of late, there have been several allegations bordering on various criminal misconducts against Tinubu since he emerged as the flag bearer of the APC.

Apart from the controversy surrounding his real age, there have issues about his education and the schools he attended as well as his alleged links with narcotics and money laundering.

Last week, the United States District Court for the Northern District of Illinois released certified true copies of documents that linked Tinubu with narcotics trafficking and money laundering in the 1990s when he lived in Chicago

The 56-page document showed Tinubu forfeited $460,000 to the U.S. authorities to stop a drugs related investigation in 1993 which he did not want to get to trial.

But, the spokesperson of the Tinubu Campaign team, Festus Keyamo, a senior advocate of Nigeria (SAN), tried to dismiss the document as not enough evidence of Tinubu’s conviction for the crime.

While the controversy over the US court document was yet to settle, early this week, an investigative journalist, David Hundeyin, published a an incriminating report in West Africa Weekly which showed that Tinubu lied on oath in his claims that he worked as an accountant with the US consultancy firm, Deloitte USA while Chicago.

However, in response to an inquiry through a subpoena for the employment records of the APC candidate by Hundeyin, Deloitte USA said it could not find among his its staff any record with the name, Bola Ahmed Tinubu. sent for inquiry.

The latest in a series of damning allegations against Tinubu surfaced on Thursday, as an Abuja-based lawyer, Mike Enahoro-Ebah filed case No CR/121/2022 at the Chief Magistrate Court of the Federal Capital Territory, Abuja to accuse the APC presidential candidate of perjury, identity theft, and criminal forgery. 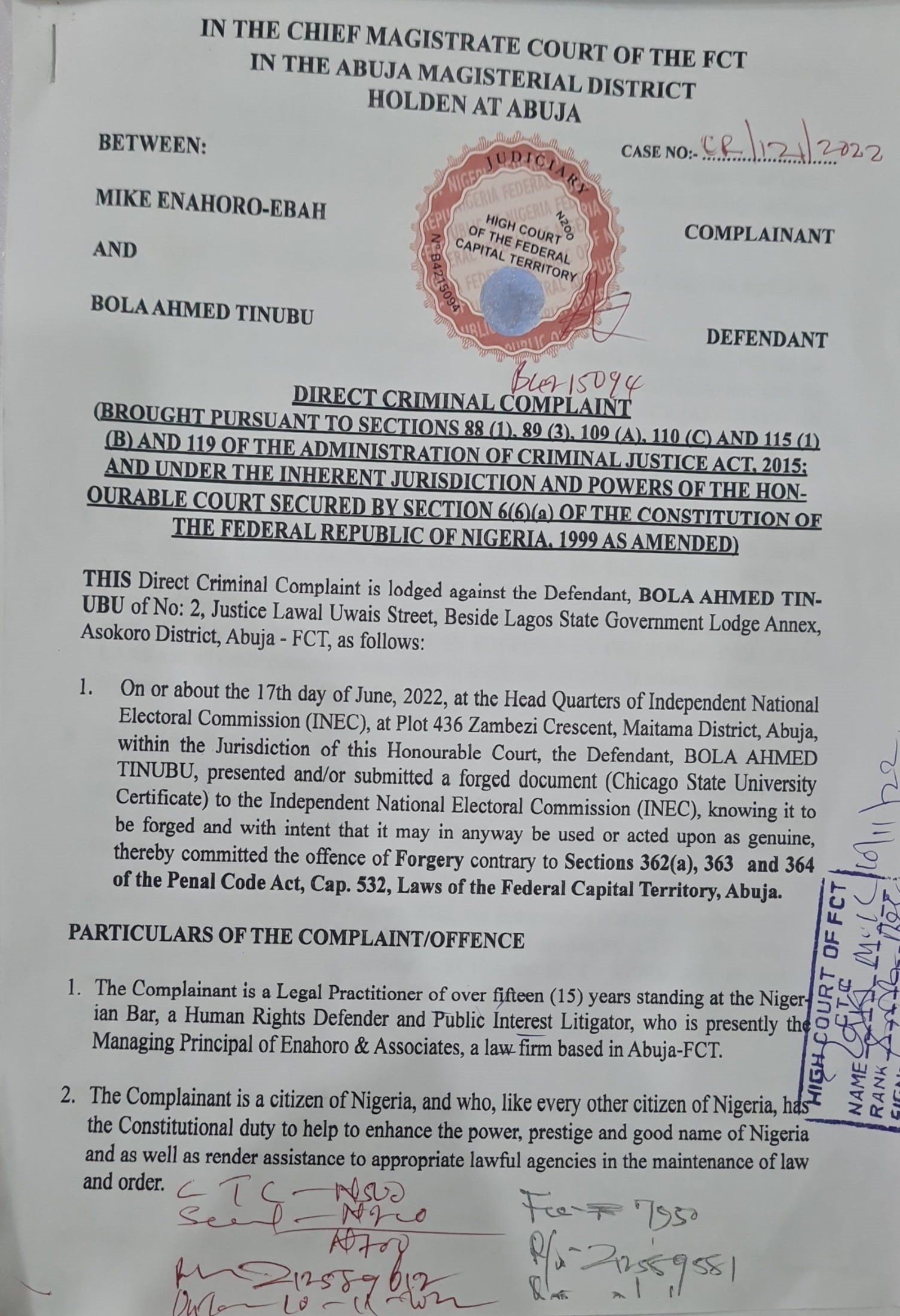 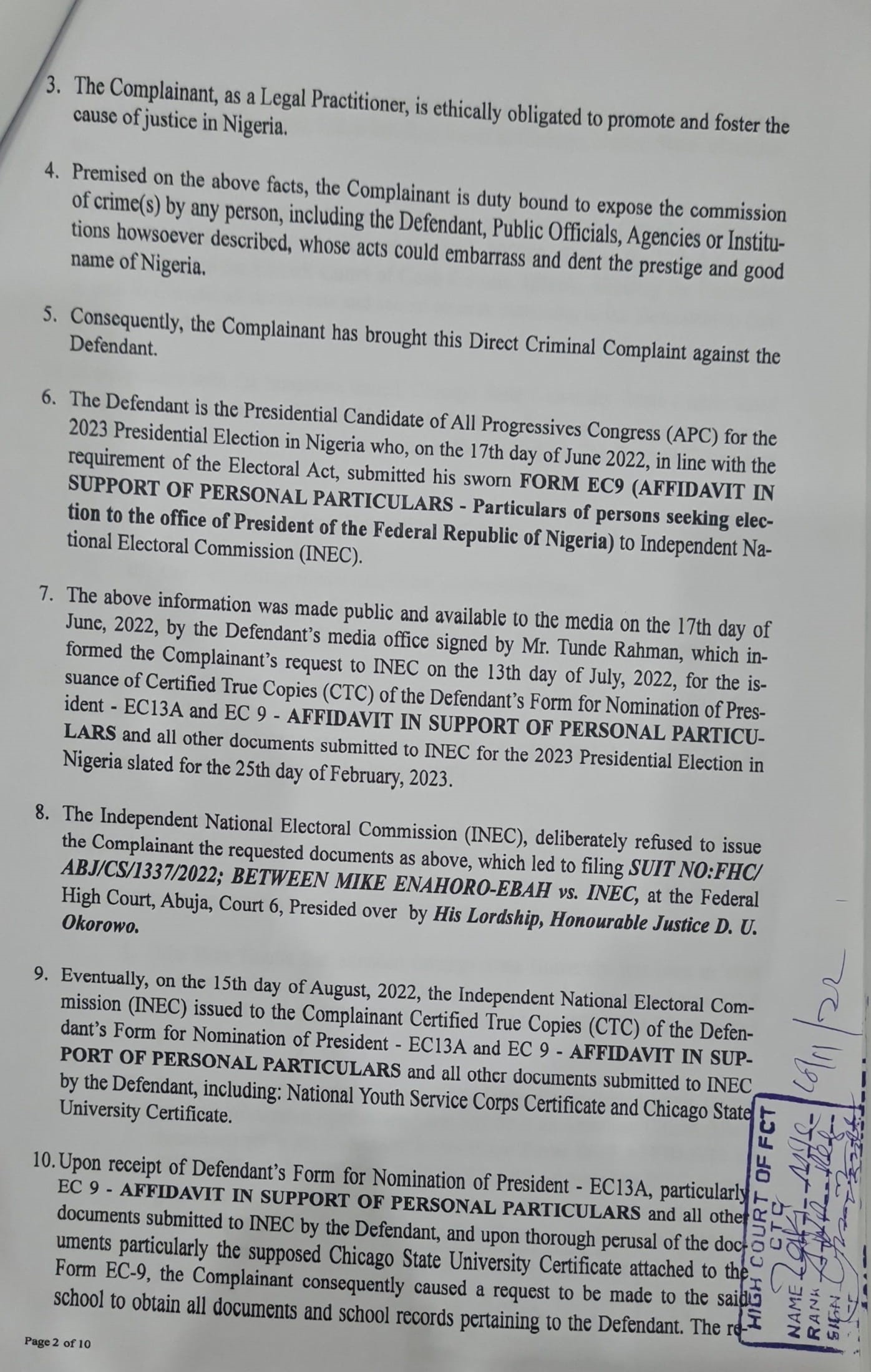 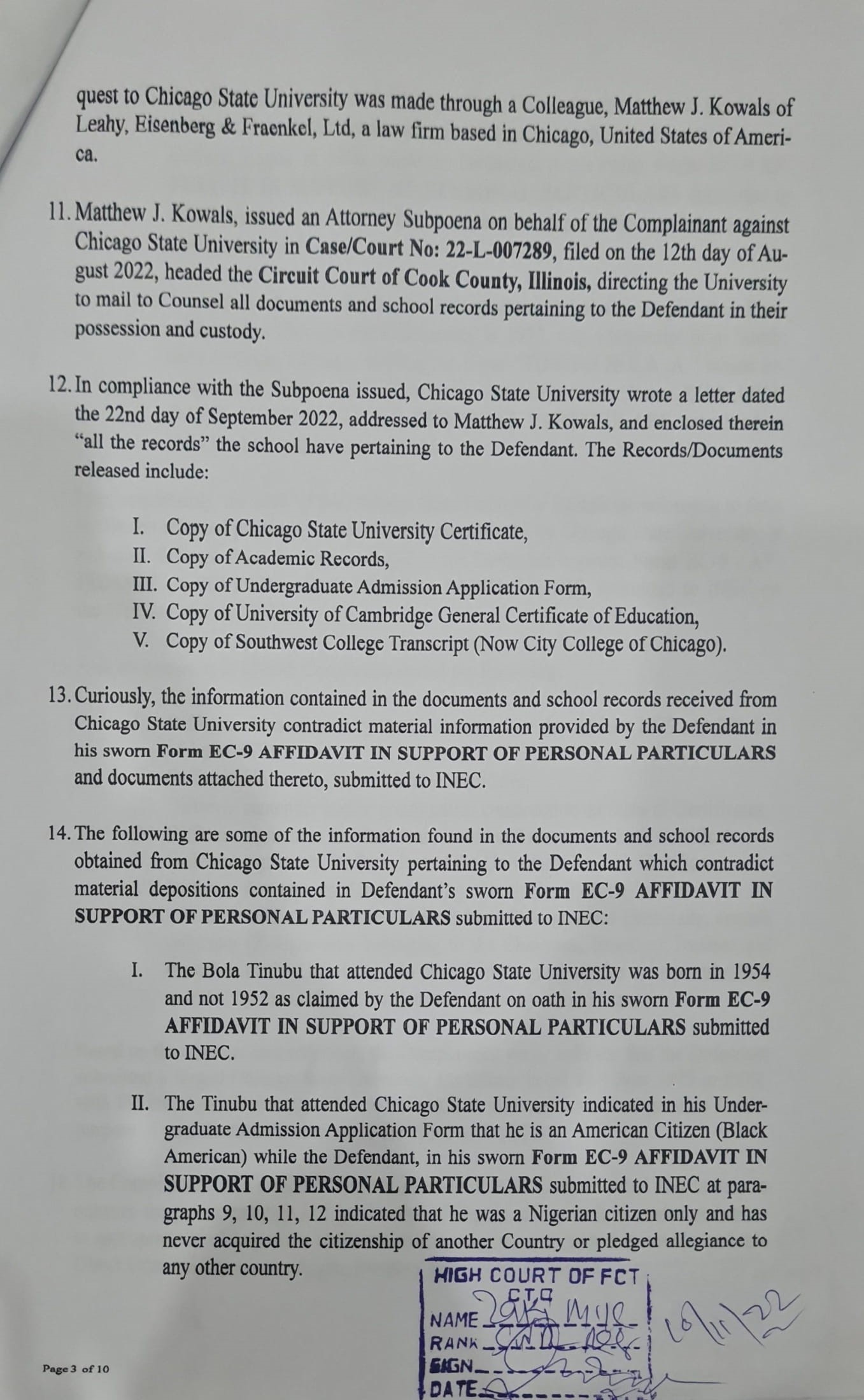 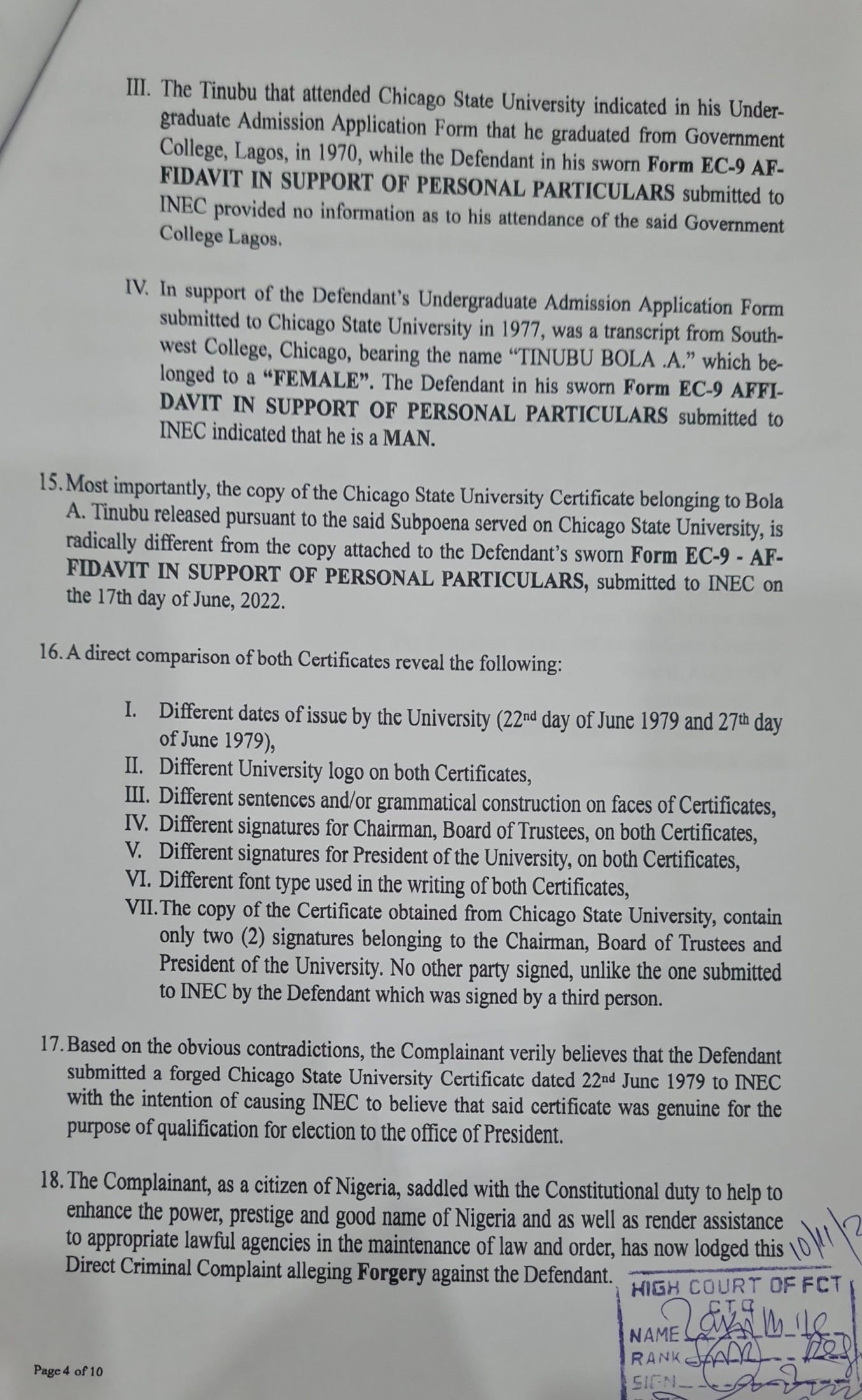 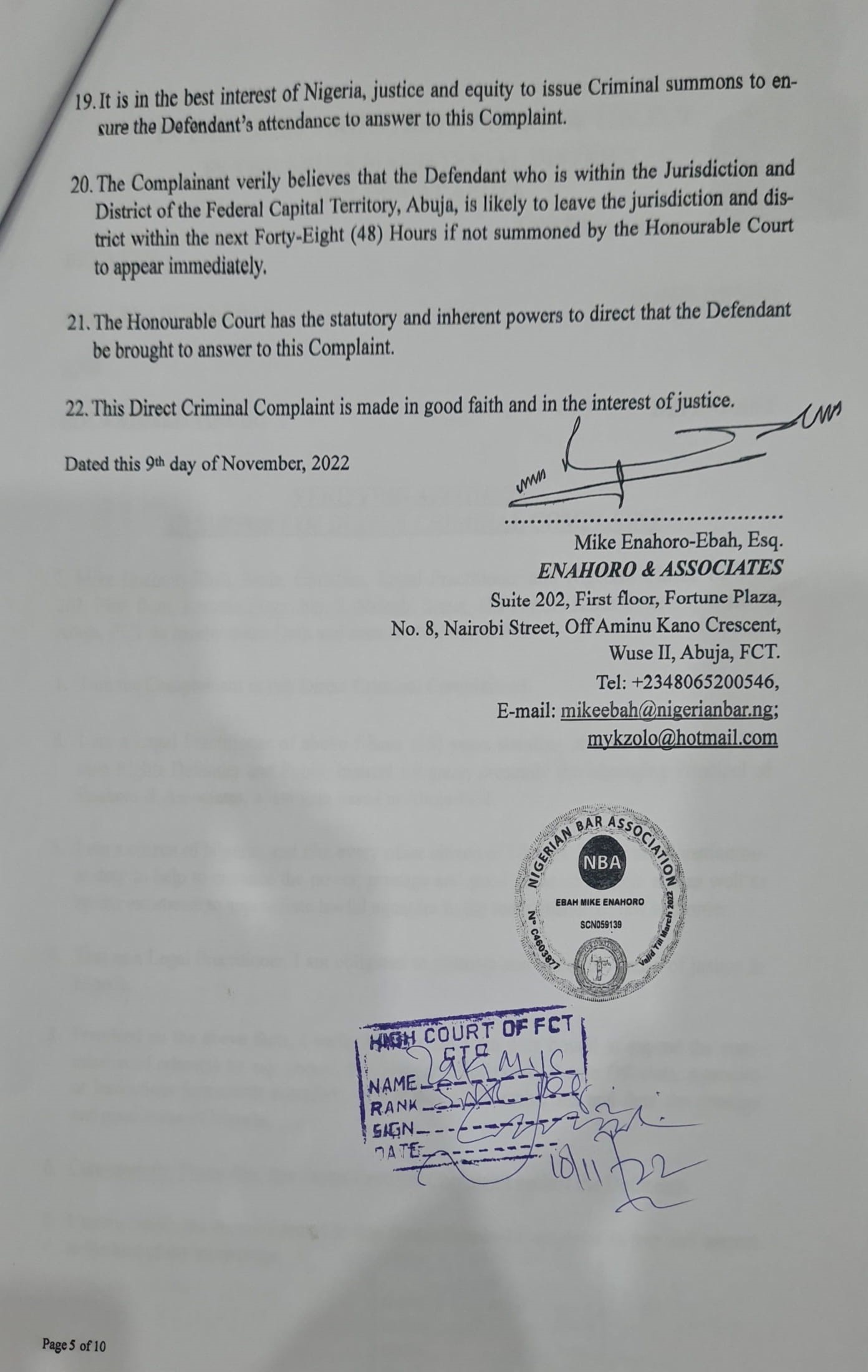 In a criminal complaint filed pursuant to Section 88(1), 89(3), 109(a), 110(c) and 115(1)b and 119 of the Administration of the Criminal Justice Act 2015, which is secured by Section 6(6)a of the Constitution of the Federal Republic of Nigeria 1999 (as amended), Enahoro-Ebah accused Tinubu of presenting or submitting forged documents to the Independent National Electoral Commission (INEC) with his application to to contest the Presidential election.

The lawyer said Tinubu committed the crime knowingly in violation of the provisions of Sections 362(a), 363 and 364 of the Penal Code Act, CAP 532, Laws of the Federal Capital Territory, Abuja.

Section 137(1), subsection (j) of the Constitution of the Federal Republic of Nigeria (1999) provides that one of the conditions a candidate in an election may be disqualified from contesting is if, among other, he/she is found to have presented a forged certificate to the Independent National Electoral Commission (INEC).

Tinubu may be found liable for the offence if he fails to defend himself for the crimes.

Meanwhile, in his particulars of claims, the lawyer, who said his complaints were in the national interest, said Tinubu as the Presidential Candidate of the APC for 2023 Presidential Elections on June 17, 2022, in line with the requirements of the Electoral Act, submitted his sworn Form EC9 (Affidavit in support of personal particulars of persons seeking election to the office of the President of the Federal Republic) to INEC.

The lawyer said suit No. FHC/ABJ/CS/1337/2022 against INEC was sequel to the refusal by the electoral body to release to him the Certified True Copies of Tinubu’s Nomination Form – EC13A and EC9 in support of his particulars and all other documents submitted to INEC. 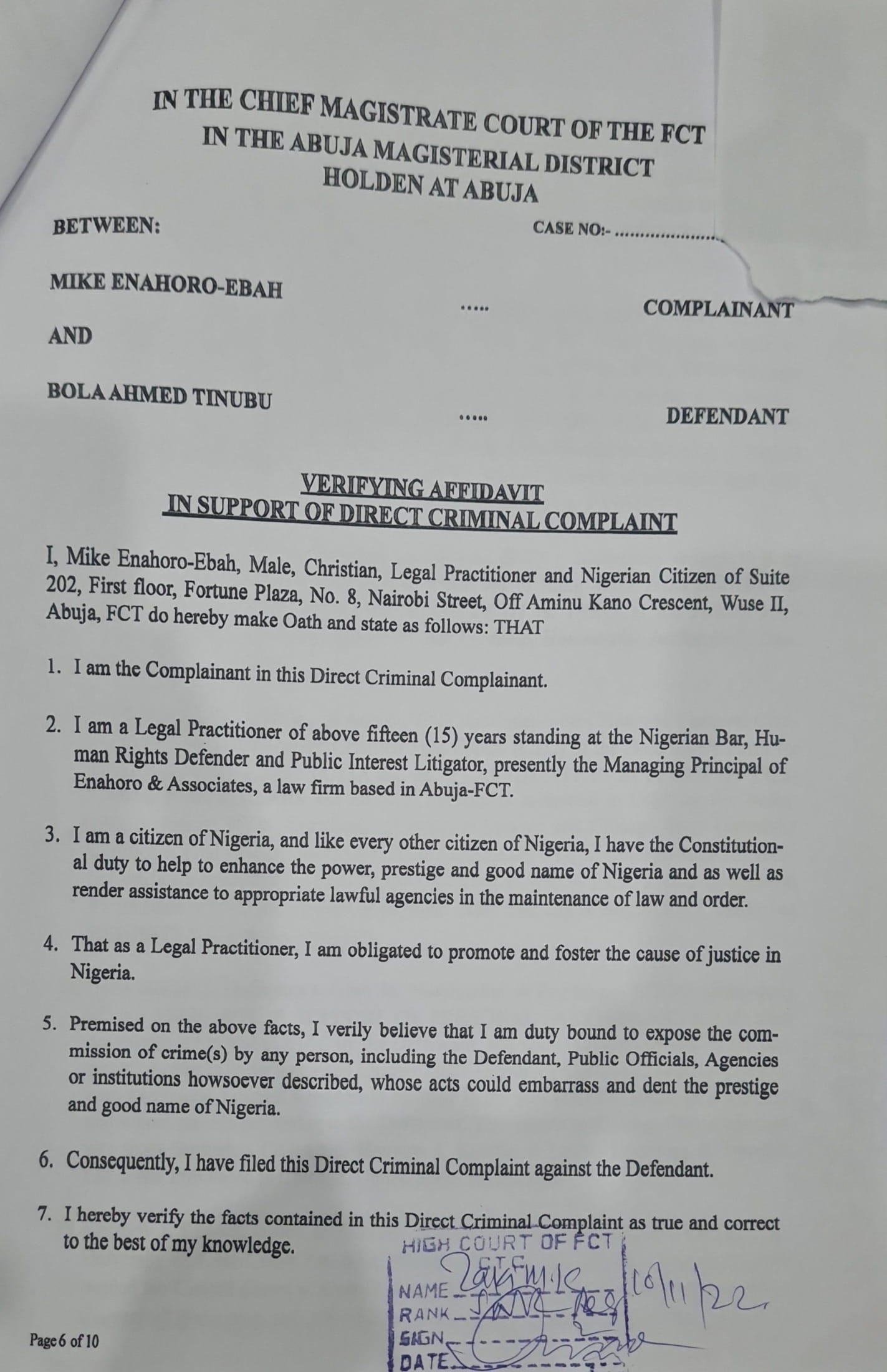 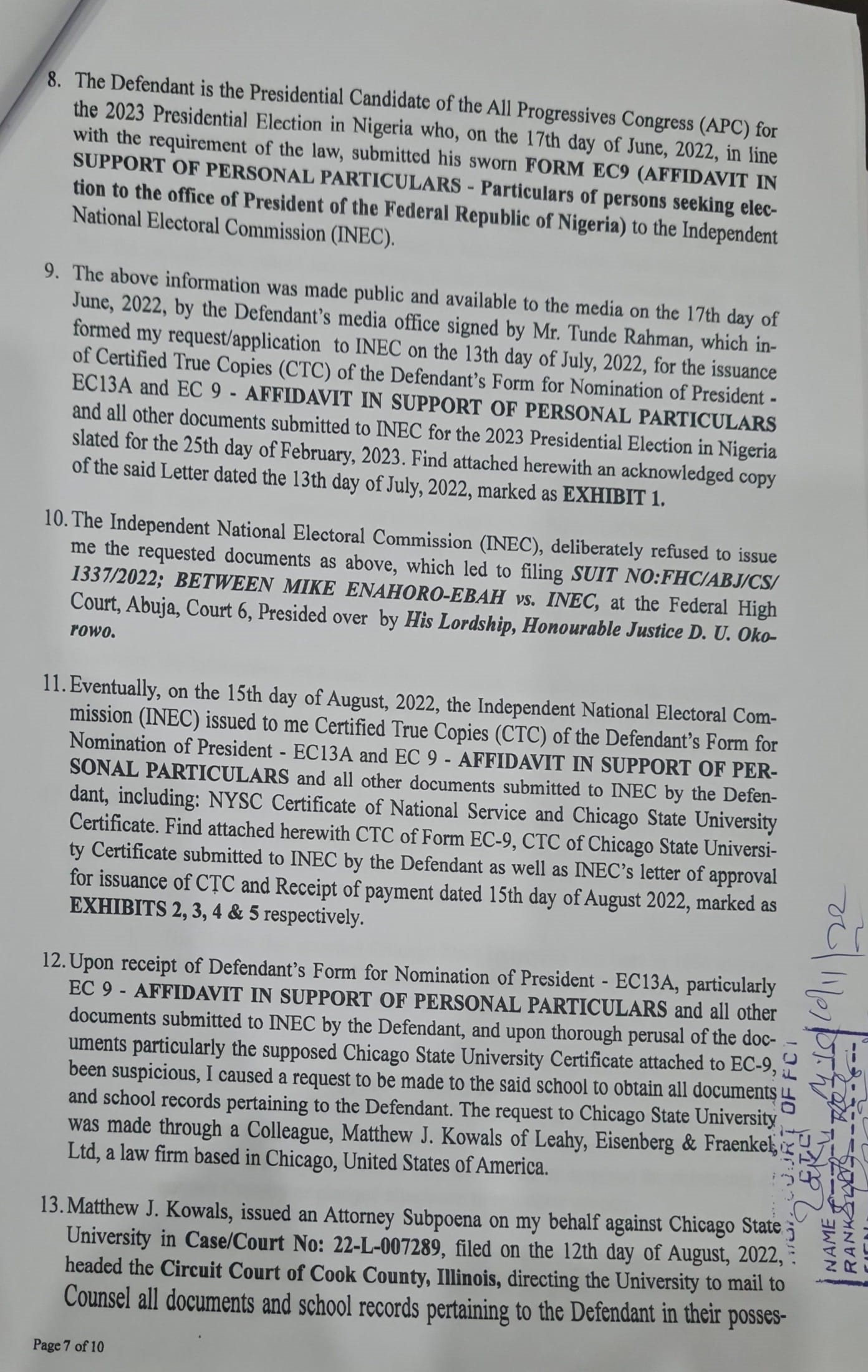 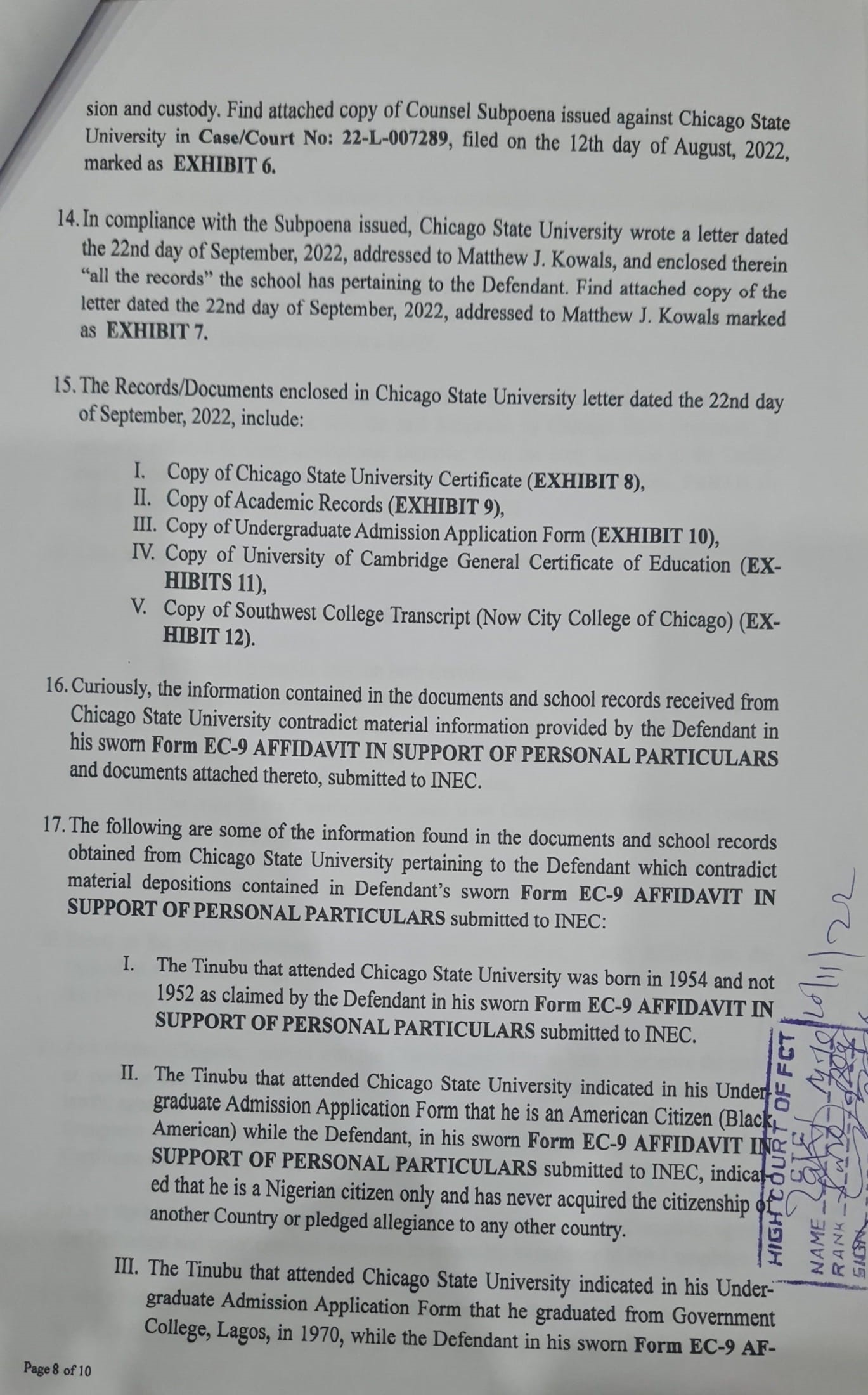 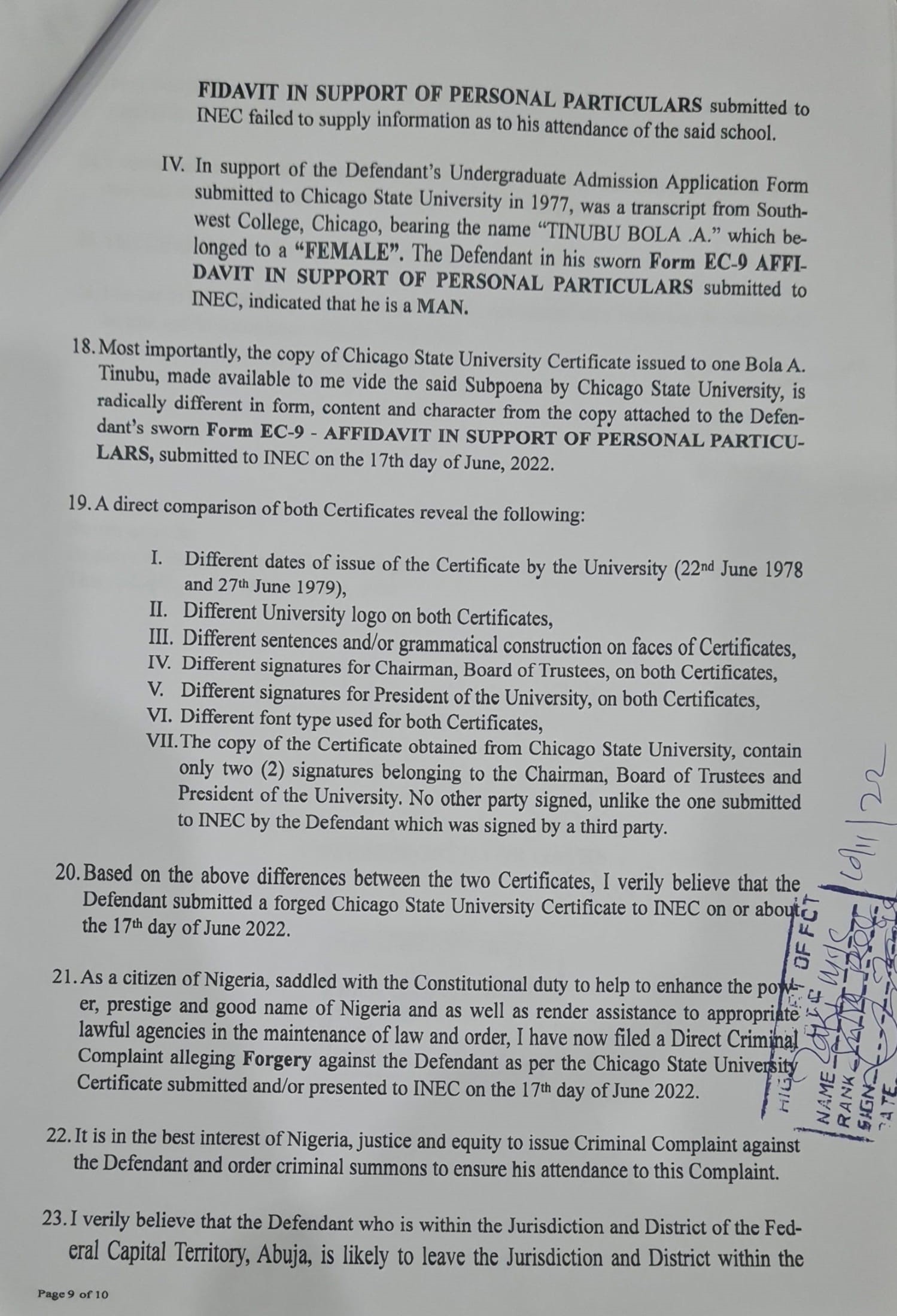 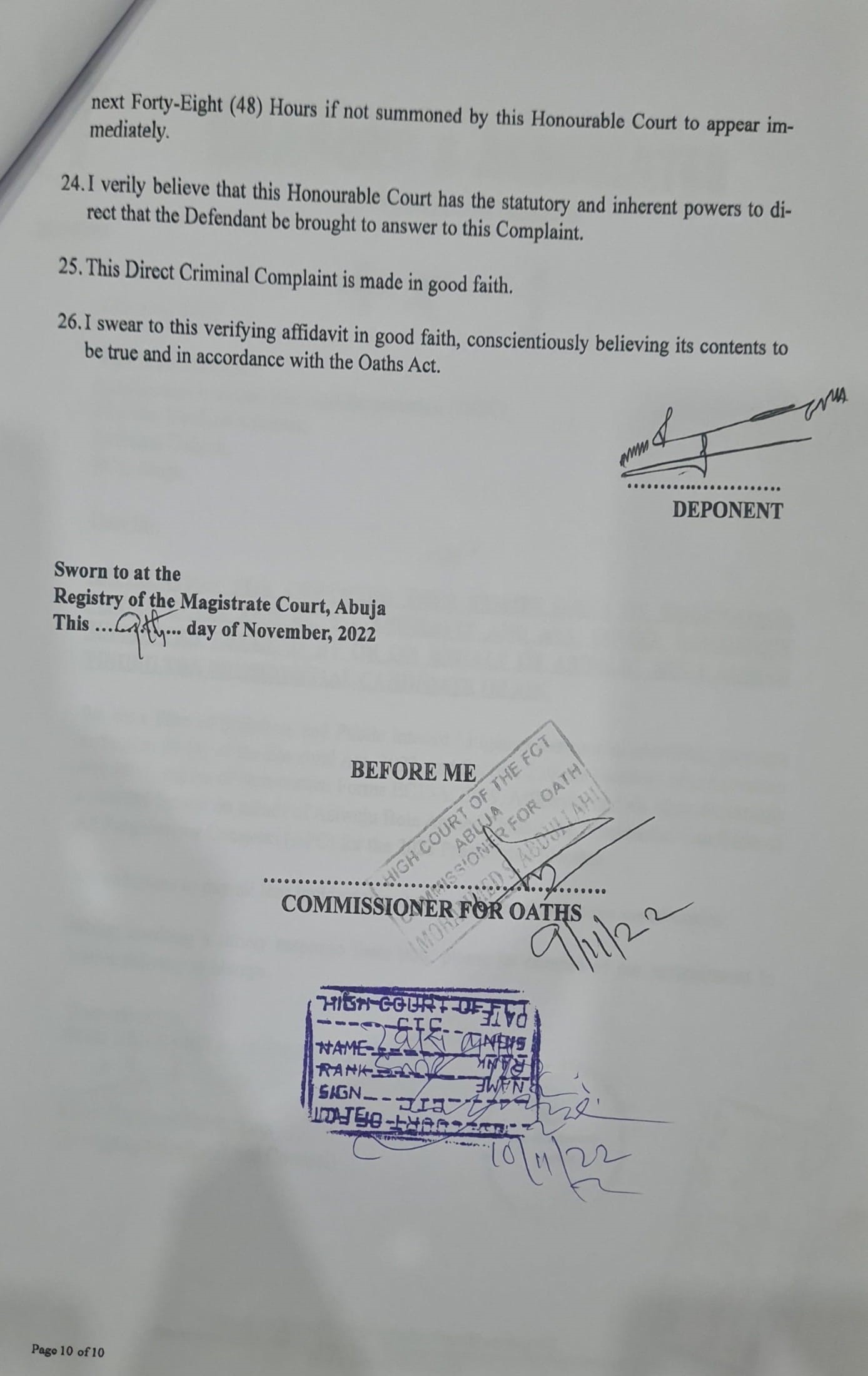 Following INEC’s release of the requested CTCs of all the documents filed by Tinubu, including the National Youth Service Corps (NYSC) certificate and the Chicago State University Certificate, on August 15, 2022, the lawyer said he sent a request to the school to obtain the original copies of all the documents, credentials and other school records pertaining to Tinubu.

The request to Chicago State University, the lawyer said, was made through an accredited attorney, Mathew J. Kowals of Leahy, Eisenberg &Fraenkel, Ltd, a law firm based in Chicago, United States, through a subpoena in case No: 22-L-007289 filed August 12, 2022 at the Circuit Court of Cook County, Illinois.

The subpoena directed the University to mail all documents and school records pertaining to Tinubu in their possession and custody.

Chicago University responds
In response to the subpoena, Chicago State University in a letter dated September 22, 2022 send “all records” in their possession pertaining to Tinubu, including a copy of the Chicago State University certificate; Tinibu’s academic records; his undergraduate admission applications form; his university of Cambridge General Certificate of Education, and the transcript of the Southwest College (now City College of Chicago).

The Registrar in charge of Office of Records and Registration, Caleb Westberg, said Bola A. Tinubu attended Chicago State University from August 1977 to June 1979, and was awarded a Bachelor of Science degree in Business Administration on June 22, 1979. 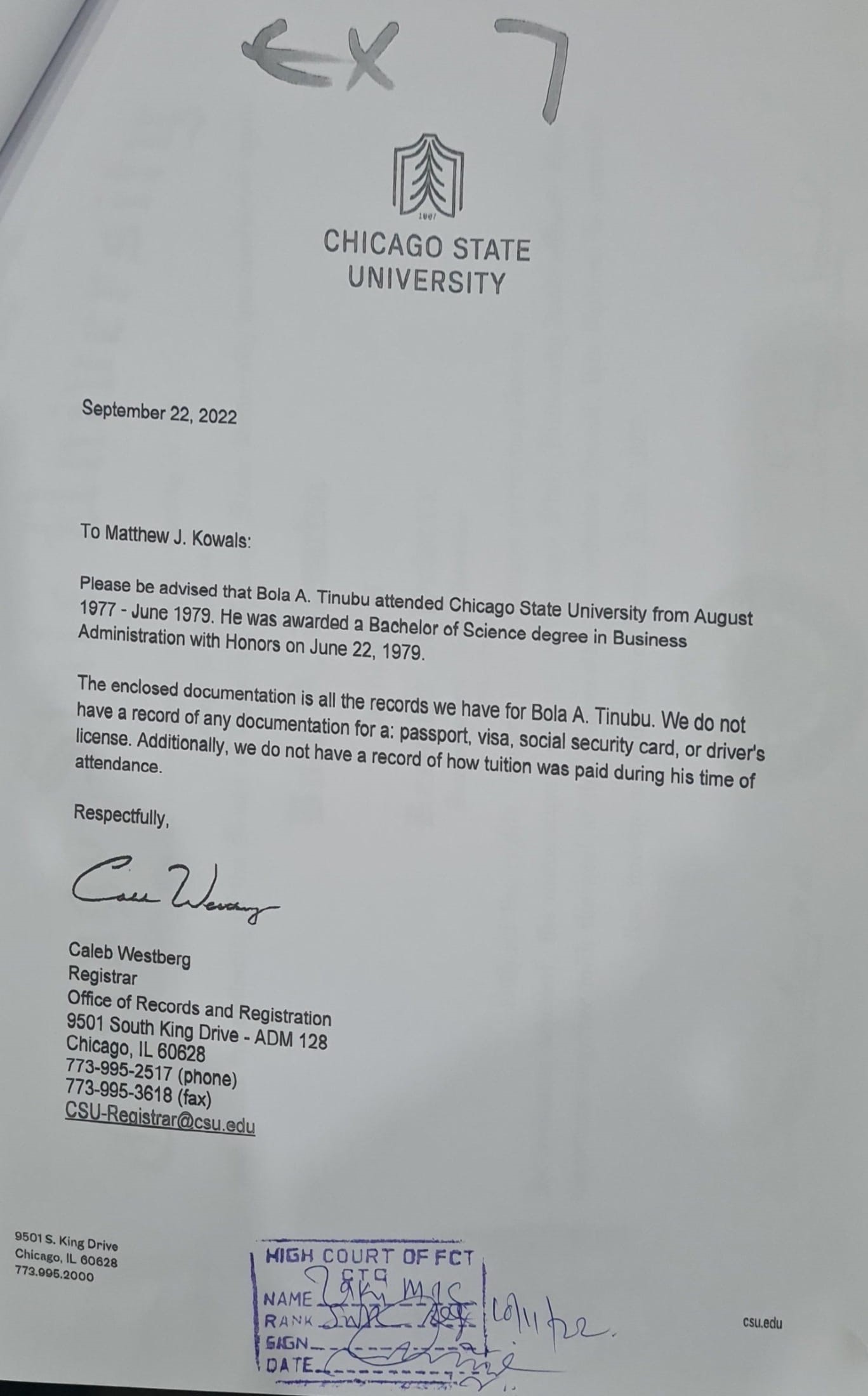 He said the school do not have records of any documentation for a passport, visa, social security card or driver’s license, nor any record of how tuition was paid during his time of attendance.

The lawyer said a review of the credentials received from the Chicago State University showed fundamental discrepancies with the documents in the sworn affidavit filed by Tinubu in his EC9 in support of his particulars submitted to INEC.

For instance, the age declared by Tinubu in his Chicago State University admission application form said he was born in 1954, contrary to his declaration in his sworn EC9 affidavit submitted to INEC that he was born in 1952.

Again, the University said Tinubu that attended the institution wrote in his Undergraduate Admission Application Form that he was a Black American citizen, contrary to Tinubu’s claim in his sworn EC9 affidavit submitted to INEC, particularly paragraphs 9, 10, 11. 12, which claimed Nigerian citizenship only, who has never acquired the citizenship of another country or pledged allegiance to any other country. 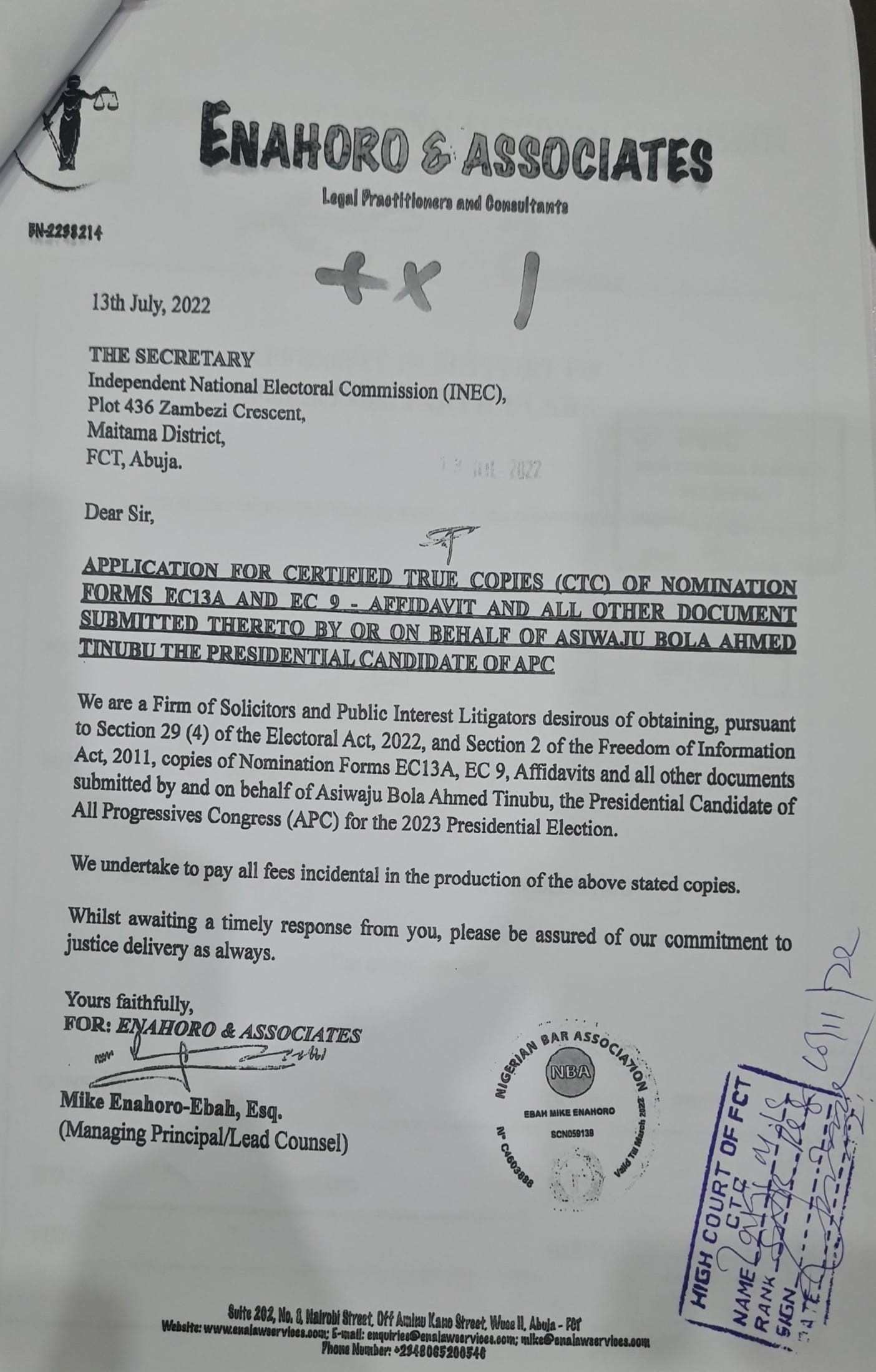 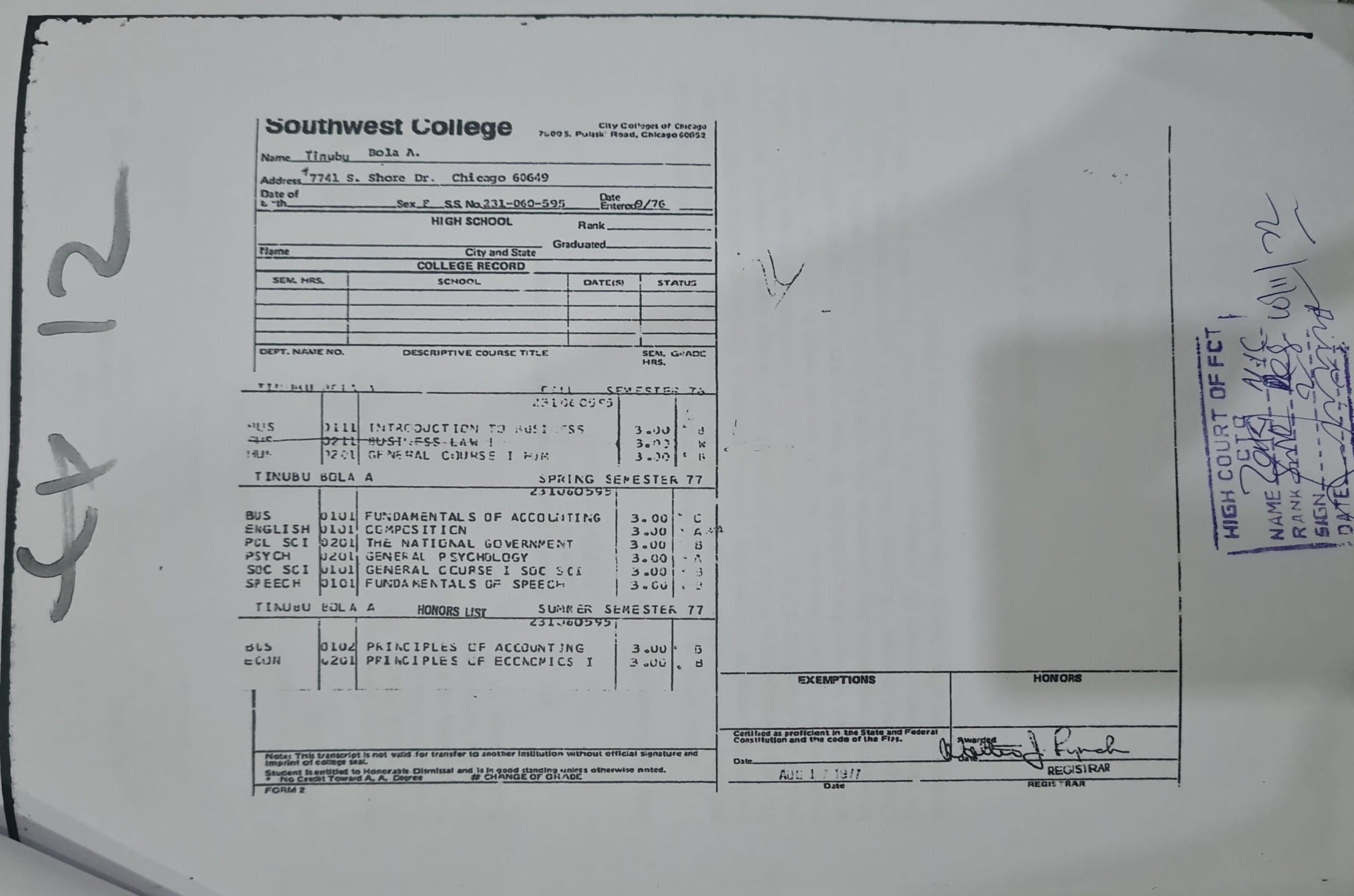 Also, the University said Tinubu that attended the school said in his Undergraduate Admission Application Form that he graduated from Government College, Lagos in 1970, contrary to his sworn affidavit submitted to INEC, which did not provide any information about his attendance at Government College, Ibadan.

Again, the University said Tinubu’s Undergraduate Admission Application Form completed in 1977 in support of a transcript from Southwest College, Chicago, bore the “Tinubu Bola A.” belonging to a female student, contrary to the affidavit submitted by Tinubu to INEC, which showed he was a man.

Other discrepancies observed in the credentials obtains from the Chicago State University showed the copy of the certificate belonging to Tinubu, which was released after the subpoena, was radically different from the copy attached to Tinubu’s sworn EC9 affidavit submitted to INEC on June 17, 2022. 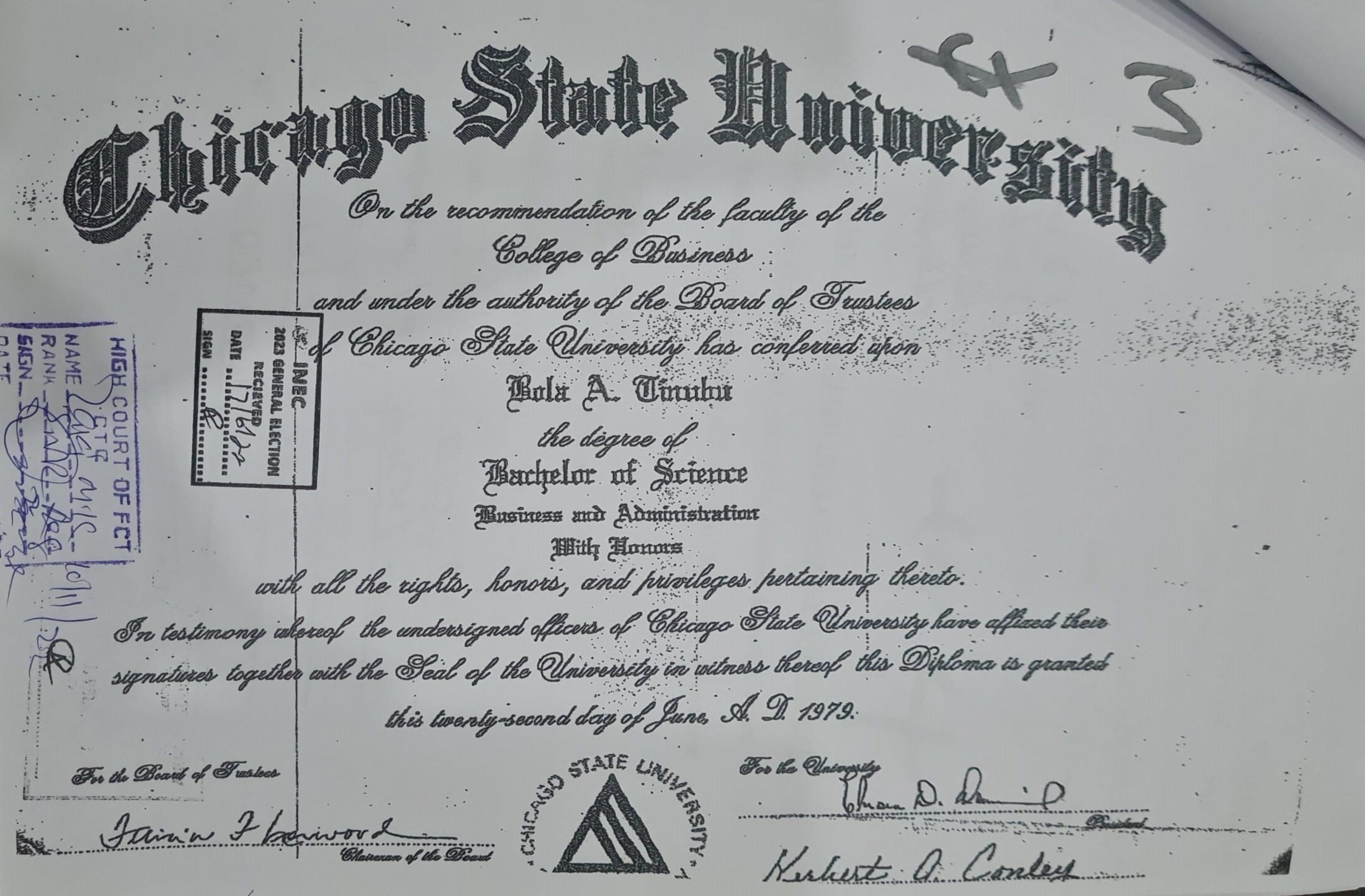 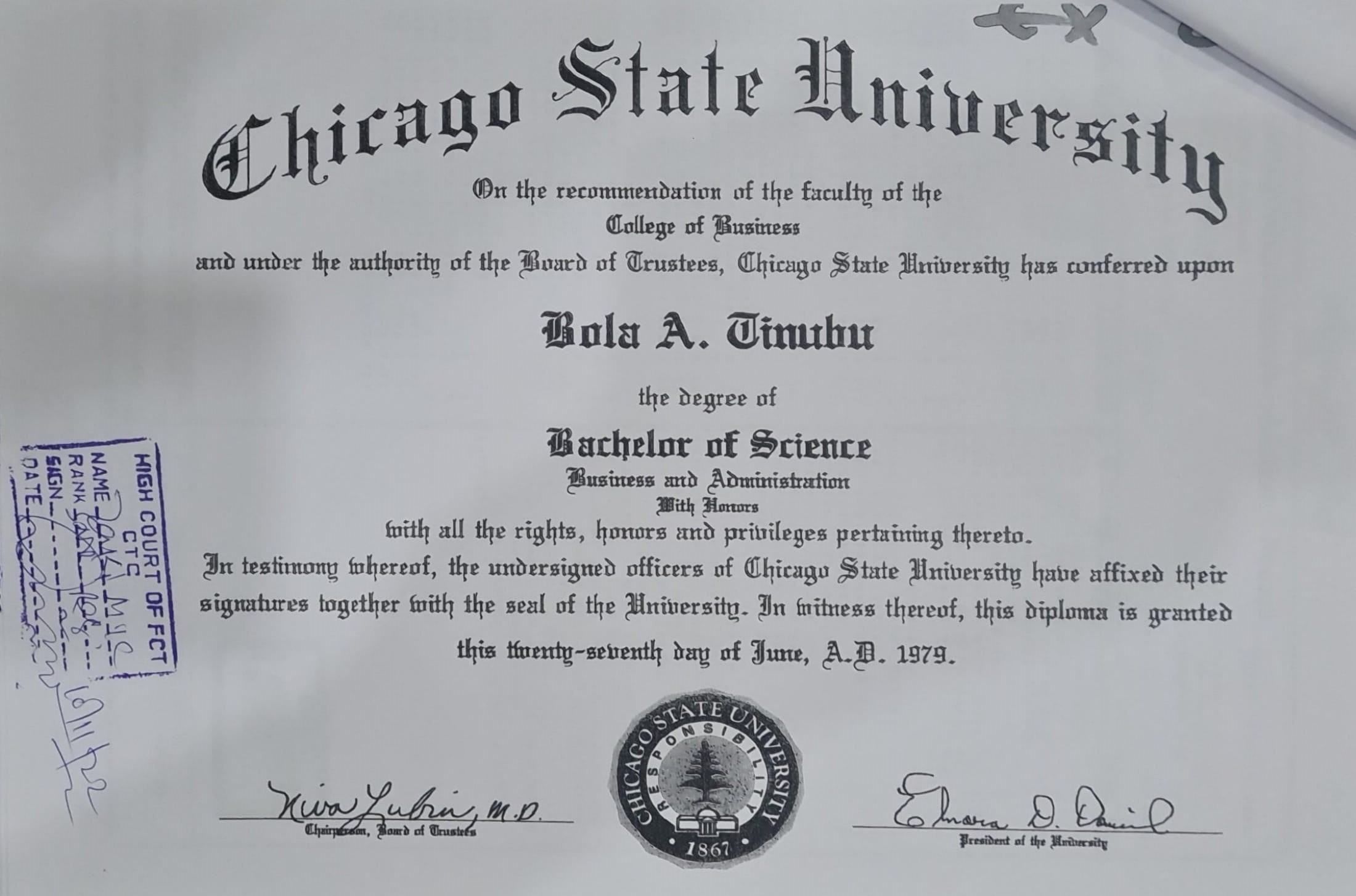 In addition, whereas the certificate from the Chicago State University contained only two signatures for Chairman Board of Trustees and President of the University, No other party signed, unlike the certificate submitted by Tinubu to INEC, which was signed by a third person.