Despite the explanations by the Nigerian National Petroleum Corporation (NNPC) on why long fuel queues of anxious motorists have resurfaced outside filling stations nationwide, findings show the real reason could be traced to the manipulative activities by petroleum products marketers.
The Group Managing Director of the NNPC, Mele Kyari, blamed the long queues in Abuja and other parts of the country since on the nationwide strike by members of the National Association of Petrol Tanker Drivers.
He said the industrial action was in protest against the National Association of Road Transport Owners (NARTO) over unresolved compensation issues.
Kyari spoke on Tuesday in Abuja after briefing President Muhammadu Buhari on the current situation in the petroleum industry.
Although Kyari frowned at the development, and assured that the situation would return to normalcy within hours after the intervention by the NNPC, the queues appears to have grown longer, as they have been noriced in most other parts of the country.
Reports are that contrary to the postulation by the NNPC GMD, the return of the queues at the filling stations across the country is caused by the petroleum products marketers to create artificial fuel scarcity to armtwist the government to approve an increase in petrol price in the country.
It is not clear how the government is going to respond to the latest situation at the end of the day as it appears some of its agencies involved in the fuel pricing modulation process are working behind the scene to subtly push the marketers to create an artificial environment for a fresh fuel price hike. 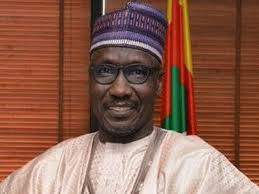 Fuel marketers have always created the impression that the prevaIling retail price was not good for their survival in business except the government carries out an adjustment in alignment with the prevailing situation at the international crude oil market.
Early this month, this newspaper reported about by the government preparatory to an adjustment in the existing retail price for premium motor spirit (PMS), popularly called petrol.
The Minister of State for Petroleum Resources, Timipre Sylva, had assured there was not going to be any fuel price hike in March till after the Easter when the ongoing dialogue with Labour over the issue would have been concluded.
In anticipation, all government agencies involved in determining the pricing template of petroleum products in the country met in Abuja a fortnight ago to discuss the issue.
It was learnt that the meeting at the NNPC was convened to consider a decision on a possible price hike immediately after Easter.
The meeting held at the NNPC Towers in Abuja had in attendance representatives from the Petroleum Products Pricing Regulatory Agency (PPPRA), NNPC, Department of Petroleum Resources (DPR), Ministry of Petroleum Resources, Petroleum Equalization Fund (PEF), among others.
It was not clear if the representatives of the organised Labour and the petroleum products were marketers were also invited to the meeting.
On March 11, 2021, the PPPRA stirred a nationwide controversy about plans by the government to increase the retail price of petrol by publishing what it called “monthly Guiding Price template of petrol.”
The agency clarified later that the template was to give the fuel consuming public an idea about the most realistic guide to fuel price for a period.
Since then, speculations have been rife that a review of the petrol price was a matter of time.
But the NNPC GMD has since cleared the doubt by saying that the over N120 billion monthly subsidy for petrol by the corporation was affecting its operations and therefore no longer sustainable.
He gave the retail price of N234 per litre as the realistic pump price for petrol determined by the prevailing market conditions for imported petroleum products against the N162 per litre then.
Since the statement by the NNPC GMD, the marketers have, without an official announcement by the relevant government agencies, adjusted the retail price of petrol to N165 per litre.
The idea of the meeting followed a report by the PPPRA that its latest market monitoring review showed that the ex-depot price obtainable for March was no longer sustainable and must be reviewed to reflect current reality.
Although the PPPRA has yet released what the current guiding retail price for petrol is for the month of April, there are indications that the market fundamentals are not in favour of continuing ro retain the prevailing price of N165 per litre.
Meanwhile, NNPC has said that the current ex- depot price of petrol would not be increased next month.
Ex-depot price, which is the approved bulk price marketers are allowed to buy petroleum products from depot owners, is a key factor to determine the pump price of petrol at the retail outlets.
The NNPC also assured petrol consumers of adequate stock of petrol to cover a reasonable sufficiency level.
“We have over 20 billion litres of petrol in stock in our depots across the country. There is no need for panic buying of the product,” the GMD said.
“Petrol will be available in all the depots in the country, including NNPC dispatched depot across the country, so nobody should panic in buying the product,” he said.