On 29 May 2015, the current administration was ushered in by a wave of hope, goodwill, and an overwhelming belief that real change was possible. Well-meaning individuals and institutions provided all the necessary support to ensure that the administration leveraged on the momentum that propelled it into power, to deliver on its ‘change’ mantra effectively. There was renewed optimism, especially as the President made clear commitments to address the pressing issues of insecurity, corruption, and economic stagnation.

As with all administrations since 1993, the Nigerian Economic Summit Group (NESG) has always placed at the disposal of the Federal Government, intellectual capacity, dialogue/research-based policy advocacy and execution support. This is consistent with the Group’s four-pronged engagement and advocacy model: Dialogue Partner, Connector, Watchdog and Intervener.
Shortly after its victory at the polls in 2015, the NESG supported the incoming administration’s Transition Committee, headed by the late Alhaji Ahmed Joda (one of the founding fathers of the NESG).

We believed that the implementation of the Committee’s recommendations would arrest deteriorating macroeconomic conditions and place the nation on the path of recovery. Furthermore, the first Summit under this administration – Nigerian Economic Summit 21 (NES#21), in October 2015, focused on the tough choices that the Government had to make, in order to signal to Nigerians and the international community, its seriousness and commitment to building a sustainable and globally competitive economy.

However, most of them did not receive the needed attention.
By 2016, the Nigerian economy had plunged into a recession that may have been avoided. As the nation was mired in economic decline, the NESG prompted the Federal Government on the need to implement deliberate strategies to exit the recession quickly. Government responded with the Economic Recovery Growth Plan (ERGP), and we continued to offer policy advice, as much as possible, to address the pressing issues.

Today, the country is stuck in an economic morass. Most macroeconomic indicators are spiralling out of control, inflicting severe hardship on more Nigerians. Even though the economy continued to recover in the first half of the year, economic growth was dominated by sectors with low contributions to output and weak job-creating capacity, while the oil sector remained in recession for eight consecutive quarters. Headline inflation is 18.6%, according to the National Bureau of Statistics, and stands at more than double the Central Bank of Nigeria’s price stability threshold of 9%.

As the world faces a food crisis linked to the Russian/Ukrainian war and the lingering effects of COVID-19 on the global food supply chains, the situation is even more dire in the Nigerian context, given the compounding effects of the unchecked insecurity and inadequate efforts to mitigate the impact of climate change – specifically the severe droughts and floods affecting our farming communities.
In addition, the unstable micro and macro-economic environment and poor infrastructure has further restricted local efforts to drive value addition and processing. The resultant effect is that Nigerians continue to spend close to 60% of their household income on food, the vast majority of our population cannot afford a healthy diet, and double digits rates of food inflation have further worsened this situation.

Despite high global oil prices, Nigeria is not appropriating the benefits as a result of low crude oil production largely due to oil theft and pipeline vandalization, declining investment and divestment caused by oil theft, high cost of production, and a harsh operating environment. The country’s external reserves have been declining for most of 2022 while the Naira continues to depreciate, and the country still operates multiple exchange rates.

Amid this crisis, fiscal pressure is imploding because of declining revenues and soaring public debt. Only recently, the Honourable Minister for Finance, Budget and National Planning, Dr. Zainab Ahmed, alerted Nigerians that the cost of debt servicing has surpassed Federal Government’s retained revenue as total public debt continues to rise.

Meanwhile, CBN’s Ways and Means financing to the Federal Government peaked at N19.6 trillion as of May 2022, and the country maintains an unsustainable fuel subsidy regime.
Clearly, the growing deficit means that Nigeria would rely on borrowing to finance the 2022 budget.

By the numbers – a bleak outlook
With rampant inflation eroding real income, the World Bank projects that an additional 7 million Nigerians will fall into extreme poverty in 2022. Great concern continues to trail the growing public debt stock, which grew to an all-time high of ₦41.6 trillion – about 120% of Government revenues as of 31 March 2022. 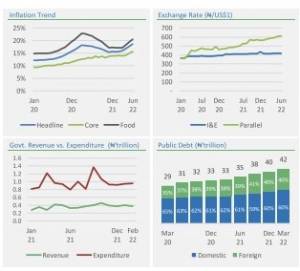 In addition, despite increased budgetary allocation to defense and national security, the current state of insecurity is indicative of a nation under siege. Nigerians now live in a permanent state of fear as bandits are able to hijack a train and kidnap dozens of passengers, overrun prisons and release hundreds of convicted criminals, and hold hundreds of kidnap victims for months at a time. Yet, despite some changes to the leadership of the national security apparatus, conditions have not improved. There is hardly any need to itemise the adverse impact of insecurity on food prices, productivity, ease/cost of doing business, investor confidence and national pride.

By the numbers – a bleak outlook
Exchange rate management continues to be hampered by capital flight and low FDI due to low investor confidence, perception of widespread mismanagement, and unbridled utterances of key public servants. 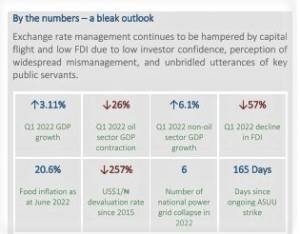 As a policy think tank, the NESG will continue to offer policy advice to any Government in power, in the national interest. We remain resolute in our mandate – we will continue to be in the vanguard of economic reforms and positive change.

Given the foregoing and following its deliberations on the domestic and external performance of the Nigerian economy in the first half of 2022, the Board of Directors of the NESG notes and commends the Federal Government for commencing the implementation of the Medium-Term National Development Plan (2021 – 2025).

In addition, the NESG acknowledges and commends the efforts of President Muhammadu Buhari and the National Assembly in passing into law the Electoral Act, 2022, which is already proving to be a veritable tool for improving our electoral process. These are good legacies, but there is much more to be done.

In this regard, the Board of the NESG comments and recommends as follows:
A decisive action to tackle the Government’s revenue challenges, which cannot be divorced from leakages through the large-scale crude oil theft; difficult operating environment for businesses, and lack of innovation in tax collection/administration, among others, that have resulted in low accretion to the nation’s revenue base. We strongly believe these leakages have continued unabated because of the absence of sanctions and ineffective tax systems.

We must return to the path of debt sustainability in the face of dwindling revenues not to create a debt burden for future Governments and, indeed, future generations.

We must prioritise our expenditure, limit our spending to items we can sustain, and eliminate wastage and graft in Government. Governments, across all tiers, should lead by example through a drastic reduction in governance costs (such as running costs of the legislatures, the proliferation of government agencies, etc.) to reflect the austere times we face. We strongly advise greater transparency and simplicity in the management and communication of various subsidies (petroleum products, electricity, etc.) to establish their true costs that benefit the people.
Urgent action is required to ensure food self-sufficiency by prioritising critical value chains and supporting private sector-led interventions to curtail this crisis and build a vibrant and sustainable food ecosystem in Nigeria based on consistent incentives and sanctions.

The failure to address the current prevailing condition of multiple exchange rates continues to reduce the much-needed flow of foreign investments and official diaspora remittances. International investors, being savvy and rational, will not invest where there is a real risk to their ability to access and repatriate investment proceeds or when the functional currency is in sporadic depreciation. Multiple foreign exchange (FX) markets with significant price differentials create room for speculation, round-tripping, cronyism, and outright graft – with an attendant adverse effect on the economy. There is no better time to harmonise the FX rates than now.
The proposed Medium Term Expenditure Framework of the Federal Government clearly indicates that the rising fuel subsidy costs continue to exceed unsustainable levels.

According to reports from the Federal Ministry of Finance, Budget and National Planning, it is clear that the current fuel subsidy regime’s debilitating impact on our fiscal fragility cannot be overstated. We urge the Federal Government to explore a systematic subsidy removal programme that cushions the impact on our most vulnerable population through a well-coordinated and effectively transmitted social protection regime.
The Federal Government is urged to devise a pragmatic national security strategy that unconditionally guarantees the safety of lives and properties within the country.
The ongoing face-off between the Federal Government and the Academic Staff Union of Universities (ASUU), which has resulted in the closure of universities for about six months, has become a national embarrassment. In order to signal the Government’s commitment to a speedy resolution, we now need direct and strong presidential leadership in the discussions and negotiations to get our students back to school. The frequency of this face-off indicates a failure in the current funding model for tertiary education.The NESG is willing to support Government’s efforts towards developing sustainable governance and funding strategies for tertiary education.
The ASUU issue allows us to segue into the rising incidence of the damaging brain drain phenomenon, which is occurring on the back of the pressures faced by Nigeriaeconomicns in recent years. Beyond the damage to the nation’s already limited human capital resource holdings, the exit of a growing class of trained professionals for presumably better prospects in other countries could already be approaching systems-critical levels in several critical sectors. Restoring the country’s economic health and hope in its long-term prospects is crucial to stemming this trend.
The increased tension and apprehension within the citizenry arising from the effect of the economy deserves urgent attention. We appeal to our leaders and agents of the Government to do all within their means to douse the tensions and assuage the feelings and sensitivities of the people through their utterances, actions, and conduct. The NESG calls for a new social contract between the Government and the people of Nigeria to reduce the growing trust deficit. The goodwill that a government enjoys from its people is no different from the operation of a bank account – in this case, an emotional bank account. Good governance yields additional deposits while each governance failure gradually depletes the account.
There is no doubt that the nation is at an inflection point, and the actions (and inactions) of leadership will have significant implications for the direction of inflection. It is still possible to turn the tide, and it is not too late to bring the nation out of the current quagmire. Our appeal to Mr. President is that a lot can still be done to turn the curve within the remaining ten (10) months of this administration. This requires tough choices and decisive actions, with no sacred cows. As one to whom providence has bestowed the honour of leading this nation time and again, your administration can begin to lay the groundwork for a legacy that a new government can build upon from Monday, 29 May 2023.

In the national interest.

Ighodalo, the Chairman of NESG, wrote on behalf of the Board of Directors.