Earlier last month, precisely on Thursday, October 7, this writer joined the entourage of Governor Udom Emmanuel of Akwa Ibom State to the University of Nigeria, Nsukka where the Governor delivered the 2021 Founder’s Day Lecture.

The other great ‘Lion’ in the delegation was Nigeria’s former Ambassador to Russia, Chief Assam Assam who also served Akwa Ibom State as the Attorney-General and  Commissioner for Justice.

The Founder’s Day was to mark the spectacular contributions of the  great statesman, the late Dr Nnamdi Azikiwe to the establishment of the University of Nigeria.

The legendary University exists as a counterpoise against the current agitation by some Igbo youths to sever ties with a country for which the great Zik of Africa, their iconic son, who set it up, lived and died.

One does not know why the Governor of Akwa Ibom State was picked as this year’s  guest speaker on such an auspicious occasion. He isn’t an Alumnus. And therefore not a great Lion. He is an Akokite,an alumnus of the University of Lagos.

As one journeyed through the meandering road towards Nsukka and into the lush greens of that citadel of learning, one wondered if the Vice Chancellor and his team had known that the celebrated Zik of Africa  was, in the 1920’s, a mentee of the late Chief Nyong Essien, a respected Akwa Ibom titan, who was the pioneer Chairman of the Eastern Nigeria Council of Chiefs and the Nsom of Uruan in the Ibibio heartland of Akwa Ibom State.

There is a possibility that the Governor was properly briefed, because he was accompanied by his Commissioner for Local Government and Chieftaincy Affairs, Frank Archibong, on the trip.

One imagined the organizers had remembered that the first Head of Government, then known as Leader of Government Business, in the Eastern region was another distinguished Akwa Ibom son and a leading intellectual of that era , the late Professor Eyo Ita from Ibeno.

Yes, there are memories of Dr. Ibanga Udo Akpabio who served as Secretary–General of the defunct Ibibio State Union, and a Minister in the Eastern regional government who moved the motion for the establishment of the University.

Even the symbol of the institution, the Lion, which stands in a  menacing poise at the erstwhile main entrance into the University, reflects the contribution of another Akwa Ibomite, as it was chiseled professionally by an Akwa Ibom sculptor, Dr. Uko Akpaide who, incidentally, taught my father when today’s old men were struggling boys in elementary school.

Akwa Ibom is also one of the catchment areas of the University, a circumstance which gives advantage to applicants for admission into the school from the state.

It would be nice, in addition, to have indigenes of the state enjoy such favourable consideration in employment opportunities too. After all, Akwa Ibom was part of the oil – palm belt, the golden goose at that time, which exploitation generated resources to fund the building of the University.

So much for some of the vital links between Akwa Ibom and the first indigenous University in Nigeria. 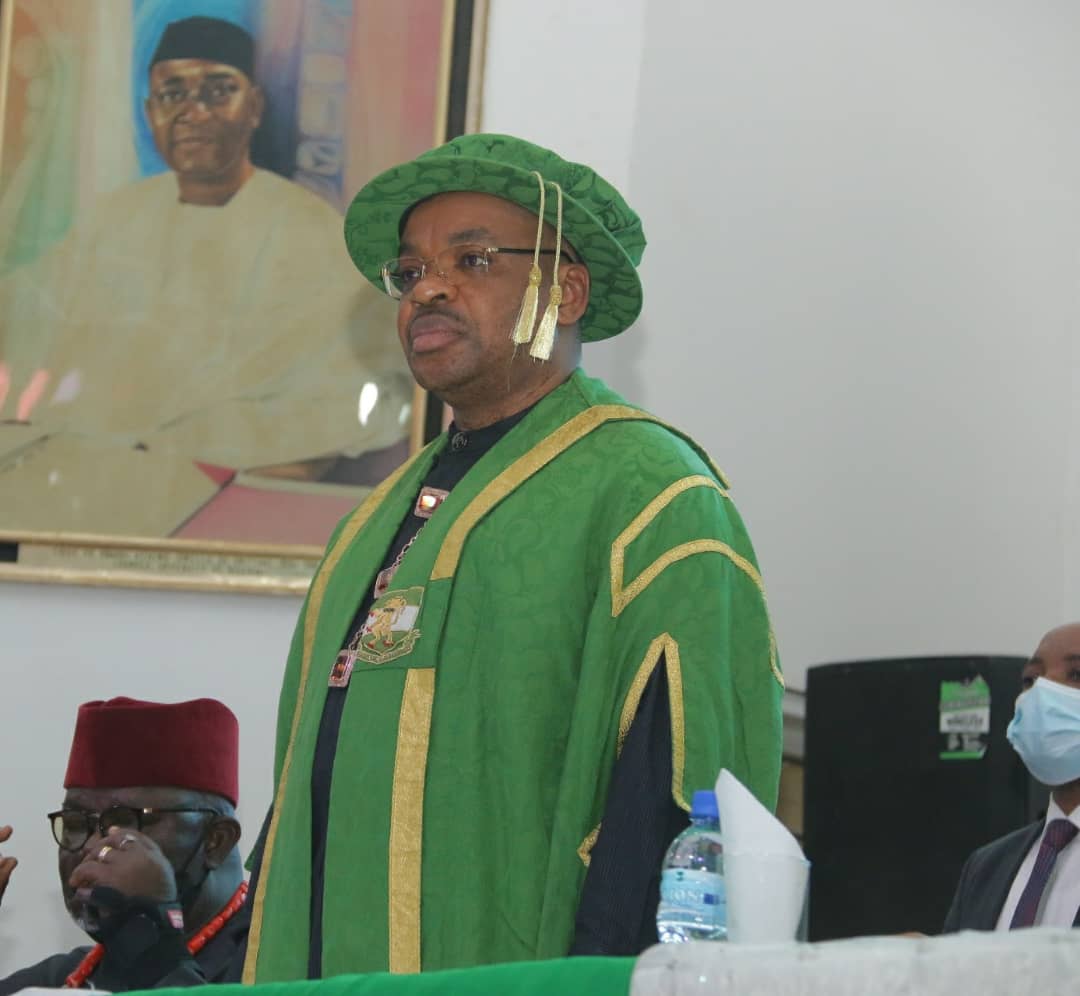 Governor Udom Emmanuel seized the moment to present a case study on how he has changed the narrative of development through infrastructure development q1and Industrialisation in Akwa Ibom, once a civil service state’.

The Governor, who held the audience spell bound in his characteristic oratory, said: “Shortly after I was sworn in, fully conscious of where we were going, I set up a Technical Committee on Foreign Direct Investment and charged them to go all out and sell our state, our areas of comparative advantage and ensure, through Industrialisation, we would expand the opportunities of growth for our people.”

Having been properly robed in the requisite academic gown temporarily becoming a ‘great lion’, the governor gained confidence and turned professorial.

He taught his captive audience that ‘the key drivers of Industrialisation were the quality of infrastructure on ground and of course, peace and security, since investors will not go to a place that is unsafe and insecure”

This explains his ‘Maintain Peace Movement’. It was telling the Secretary–General of the Group, Prince Enobong Uwah was in the flight.

Does anyone out there still have issues with Governor Emmanuel’s deep concern for a peaceful environment?

No doubt, there is a correlation between a peaceful and more  secure environment and influx of investors into any location. Any wonder then that Uyo, the state capital, once a sleepy city, is no longer a dull place, as it welcomes and hosts business people who fly in to stay, cut deals and savour the hospitality of the location and its array of delicious cuisines.

Another sector which the present government has changed the narrative is Aviation, through Ibom Air, even though critics continue to ask questions about the ownership structure of the Airline.

Nevertheless, Udom Emmanuel said “Ibom Air, has become a national sensation, flying the colours of Akwa Ibom within the Nigerian Aviation space and dominating it, a mere two years after its maiden commercial flight’

Indeed, Ibom Air, one of the flagship success stories of Governor Emmanuel operates from the only airport in Nigeria, arguably, with specifications where two aeroplanes can take off at the same time.

It is important to underscore that the airline is just one aspect of the business operations plan of the Airport.

The Airport in Uyo is a potentially Maintain, Repair and Overhaul (MRO) hub with prospects for job creation, more investments and ancillary businesses. Ultimately, the entire environment around the Airport would become a city with profitable services around it.

The Governor used the podium at Nsukka to repeat his grand vision, which a lot of politicians in the state do not seem to see.

He said: “As I always say, it is good for a 21st century leader, to have a broad vision and the requisite exposure to international best practices. What do I mean by that?

“Your vision is a product of your exposure, what you have seen elsewhere, how those things work and how they can be applied in your local environment to the benefit of the people, is a lived experience and not a learned one”

Which  leader would accomplish so much and not want such accomplishments and legacies sustained through a deliberate succession agenda?

Since most Akwa Ibom politicians were not at Nsukka to hear the Governor twice on his mindset about his succession, it would suffice to re – echo Governor Udom Emmanuel’s loud and clear pronouncement on the occasion of the 6th Anniversary of his Administration on the issue.

“Let me now ask you, my dear Akwa Ibomites : Do you want a successor who will cancel out all the great strides in industrialization we have started? The peace we currently enjoy and return us to the years when violence and kidnapping reigned, and sowed fear in the hearts and minds of the people?

Do you want a successor who will come with anger towards all we have done, as opposed to continuing with the great works we have started?

Do you want a leader whose approach to testing his popularity would be to drive in a long convoy to “Ibom Plaza” and throw money at the hapless people, watching them scramble for the money and the people would say that’s “Ano owo Mkpo”(meaning that’s a benevolent giver!)

Do you want a successor who will relegate God to the background and assume an all-knowing power?

Or do you desire a successor with a known e-mail address that the International business community recognises?

Do you want a leader who will fritter away our commonwealth in search of cheap popularity, or one who would utilize the resources and continue investing in projects with enduring value for the people?

Do you want a successor who would see government as a cabal, where our commonwealth would be shared among a privileged few, or do you desire a leader who would continue to unleash the entrepreneurial spirit of our people, a successor who understands the economic dynamics that shape our globalized space and would utilize those skills to advance our well-being?

These are questions you have to provide answers, and the answers you provide would determine the type of a successor you deserve.

‘Mark my words, we will not return to the type of leadership that is big on noise and small in the execution of the big picture items.

We will never go backward on the peace in our land, the steady and focused developments we have started. The line in our State anthem has made this faith manifestly clear: Forward ever and backward never!’

He had laid emphasis on the point when he further noted: “We have gone too far ahead to retreat backward. So as you are engaging in prognostications, creating camps of loyalty and getting consumed by who you think my successor would be, always bear these thoughts in your mind.”

That sums up Governor Udom Emmanuel’s splendid vision; well written and laid out, brilliantly, stated clearly in unmistakable terms and spoken boldly within and outside the state. QED!