The Nigeria Sovereign Investment Authority (NSIA) is to partner OCP of Morocco and towards the development of the $1.4 billion Ammonia and Diammonium Phosphate production plant.
The other partners include the Akwa Ibom State government, Nigerian National Petroleum Corporation (NNPC), Gas Aggregation Company Nigeria Limited (GACN), Nigerian Content Development Monitoring Board (NCDMB) and Fertilizer Producers & Suppliers Association of Nigeria (FEPSAN) and Mobil Producing Nigeria (MPN).
Initiated under the Nigerian government industrialization strategy, partners in the project executed five important agreements on Tuesday at the Mohamed VI Polytechnic University (UM6P) in Benguerir, Morocco.
The agreements are to create a clear path for the second phase of the Presidential Fertiliser Initiate as well as create and operate a multipurpose industrial platform (MPI) in the country.
The five agreements executed on Tuesday include a Memorandum of Understanding (MOU) between the NSIA, OCP Africa and FEPSAN to commit to the second phase of the Nigerian Presidential Fertilizer Initiative (PFI II).
A Shareholders Agreement (SHA) was signed between the NSIA and OCP Africa for the creation of the Joint Venture Company (JVC) to oversee the development of an industrial platform for the production of ammonia and fertilizers in Nigeria.
Another MOU was signed between NSIA, OCP Africa and Akwa Ibom State government for the land acquisition, administrative facilitation, and common agricultural development projects in the Akwa Ibom State.
The other MOU was signed between NSIA, OCP Africa, and the NNPC for the evaluation of opportunity of an equity investment by the NNPC in the JVC and for its support on gas.
Also, a framework agreement was signed between NSIA, OCP Africa, MPN, NNPC and GACN on gas supply for the MPI.
A statement from the NSIA said the first two agreements relate to the second phase of the Presidential Fertiliser Initiative (PFI II), while the last three contracts underpin the creation of a multipurpose industrial platform (MPI) to be sited in Akwa Ibom State.
The NSIA said the agreements on the second phase of the PFI give effect to the presidential directive which has restructured the PFI programme.
The project is structured to commercialize Nigeria’s vast natural gas resources and satisfy Morocco’s demand for cost-competitive Ammonia.
Under the revised structure, NSIA’s role moves upstream, by limiting its involvement to bulk importation of raw materials on behalf of the fertilizer blenders, with bank guarantees provided by the blenders.
“This approach will make the programme more sustainable, strengthen the productive capacity of the blending plants and eliminate financial risk to the NSIA,” the investment agency said.
On the MPI project, the NSIA said three agreements were signed, for land acquisition, equity investment in the joint venture company to operate the MPI and gas supply to the project.
The first phase of the MPI Project, the NSIA said, would produce about 1.5 million tonnes per annum of Ammonia in two phases.
Up to about 70 percent of the Ammonia produced from the plant would be allocated for export to Morocco and the balance would be routed to the production of one million tonnes per annum of Di-ammonium Phosphate (DAP) and NPK fertilizers to feed domestic demand.
Also, the NSIA expects project construction to commence no later than the third quarter of 2021.
In the first phase of the project, the NSIA said about $1.4billion would be invested in building out the plant and its supporting infrastructure, with a target operations-commencement date of 2025.
The project would be sited in Akwa Ibom State because of the abundance of gas resources in the area; availability, and accessibility to land; gas adequacy; sufficiency of marine draft and other environmental and social considerations.
At completion, the NSIA said the integrated Ammonia and fertilizer plant would house – within its battery limits – the process plants for Ammonia and fertilizer production, administrative buildings, fertilizer bagging units, water purification units, storage for raw materials and finished goods, onsite power plant and other ancillary facilities.
Besides, it said the plant would have a dedicated jetty to facilitate seamless importation of raw materials from Morocco and other suppliers and export of excess Ammonia and fertilizer to Morocco and potentially other regional markets. 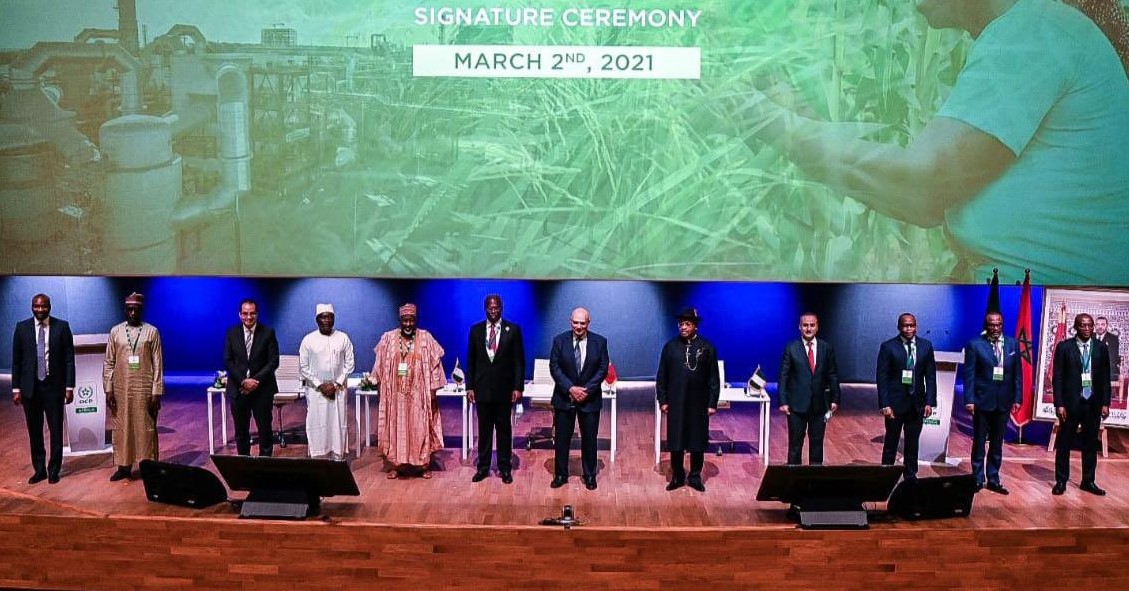 Minister of State for Petroleum and head of the Nigerian delegation, Timipre Sylva, said the agreements further cement the joint resolve of President Muhammadu Buhari and his Moroccan counterpart, King Mohamed VI of Morocco to develop a multipurpose industrial platform project in Nigeria.
Sylva said the project was of monumental significance in the quest for Nigeria’s industrialization, food security and continental cooperation, adding that President Buhari was very committed to its actualization.
The multipurpose industrial platform project, he said, was a backward integration initiative, which builds on the successes of the Presidential Fertilizer Initiative (PFI) and other sovereign bilateral initiatives between Nigeria and Morocco.
He said the President has mandated the Ministry of Petroleum Resources and all its agencies, notably the NNPC, Department of Petroleum Resources (DPR), NCDMB and all other government agencies to give maximum support for this project.
The Chairman/CEO of OCP, Terrab said ultimately, these agreements would strengthen the partnership between the NSIA and OCP Group and the different institutions in the gas industry in Nigeria.
“The outcome of the agreements will translate to knowledge transfer and broader economic opportunities as we build out the industrial platform. The platform will leverage the best of Nigerian and Moroccan natural resources, namely the Nigerian gas and the Moroccan phosphate and create a new basis for stronger ties,” Mr Terrab said.
MD & CEO of NSIA, Uche Orji, said the project which forms a key part of NSIA’s gas industrialisation strategy will deepen intra-continental trade essential to Africa’s development and economic renaissance.
This landmark project, the MIP, he said, would explore increased levels of synergy between NSIA and OCP and the partners to the transactions and ultimately ensure that Nigeria builds an industrial base that is sustainable and complimentary to mutual objectives of developing the agriculture sector in the country.
The changes to the PFI, Mr Orji said, significantly reduces NSIA involvement and transfers the responsibilities to the blenders.
The GMD of NNPC, Mele Kyari, said the corporation and all its subsidiaries are committed to the project”.
The NNPC, he said. is committed to taking equity stakes in the joint venture company and will ensure sufficient gas is available for the project to succeed.
The Akwa Ibom State governor, Udom Emanuel, assured the parties that the state was committed to ensuring the PMI project was a resounding success.
“Our state is receptive to investments and we are prepared to offer the necessary support to make the project a reality. With a site that is suitably located to enable operational logistics and an abundance of gas resources, all that is left is for the parties to accelerate the project development process.” Me Emanuel said.
Executive Secretary of NCDMB, Simbi Wabote, expressed commitment to ensure that clear operational guidelines and constructive oversight was provided to support the project. Describing the investment as a welcome development, Wabote said the Board looked forward to the commencement of the project”.
Managing Director and Chief Executive Officer, GACN, Ogunleye, all the support required for its success within our remit will be provided, adding that he expect that this would encourage more investments of this nature in Nigeria.
Chairman FEPSAN, Thomas Etuh, said: “Nigeria possesses an enviable reserve of natural gas, while Morocco is a leader in Fertiliser production. These comparative advantages make for a partnership between our two countries that is mutually beneficial and scalable.
“FEPSAN was a party to the first structure of the Presidential Fertiliser Initiative (PFI). We are working now to ensure that the results of the first phase are improved upon and broadened in the new structure,” he said.