Nigeria’s consumer price index (CPI), which measures the average change in the prices of goods and services in the economy over a period, maintained its consistent climb since January 2022, attaining the highest level in August 2022, the National Bureau of Statistics (NBS) has reported.

The statistics agency said in its latest CPI report for August 2022 published on Thursday that urban inflation rose by 1.82 percent, from 19.64 percent in July 2022 to 20.95 percent, while rural inflation climbed by 1.81 percent to 20.12 percent over the corresponding period.

These figures translate to an average national inflation rate of 20.53 percent. 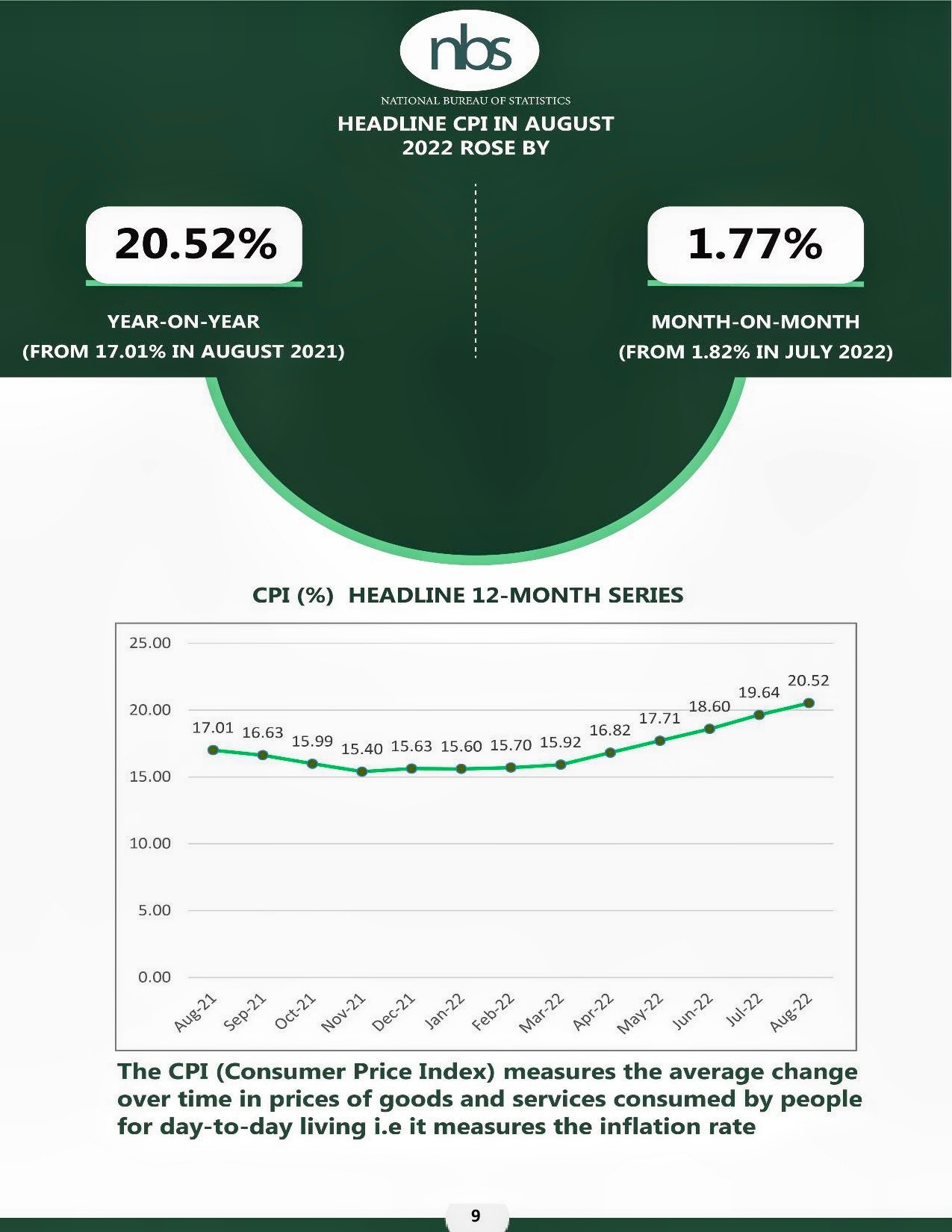 The NBS noted that headline inflation rate in August 2022, on a year–on-year basis, was about 3.52 percent points higher when compared to an average of 17.01 percent rate recorded in the corresponding month of August 2021.

Although the statistics agency reported increase in prices in all the 12 Classification of Individual Consumption by Purpose (COICOP) functions and all-items levels used in calculating the headline inflation indices, it observed however that the minimal decline in the monthly inflation rate (month-on-month basis) may have been as a result of a number of factors.

They included observed decline in the month food index for August relative to the reference month index due to harvest season; relative stability in transportation cost due to availability of premium motor spirit (PMS), popularly called petrol.

On the other hand, the NBS said the rise in the annual inflation rate (year-on-year basis) may be attributable to disruption in the supply of food products as a result growing insecurity around farmlands; increase in import costs due to the persistent currency depreciation, and general increase in the cost of production, including poor supply of electricity.

The rise in the food inflation rate, the NBS said, was as a result of increases in the prices of bread and cereals, food products, like potatoes, yam and other tuber, fish, meat, oil and fat.

“This decline is attributed to reduction in prices of some food items like tubers, garri, local rice and vegetables,” the report said.

The ‘’All items less farm produce’’ or core inflation rate, which excludes the prices of volatile agricultural produce, the report said stood at 17.20 percent in August 2022 on a year-on-year basis; up by 3.79 percent when compared to 13.41 percent recorded in August 2021.