From a total of about $10.32 billion as of June 30, 2015, Nigeria’s total foreign debt stock under President Muhammadu Buhari administration has climbed by about 288.6 percent to about $40.1 billion, latest data by the Debt Management Office (DMO) have shown. 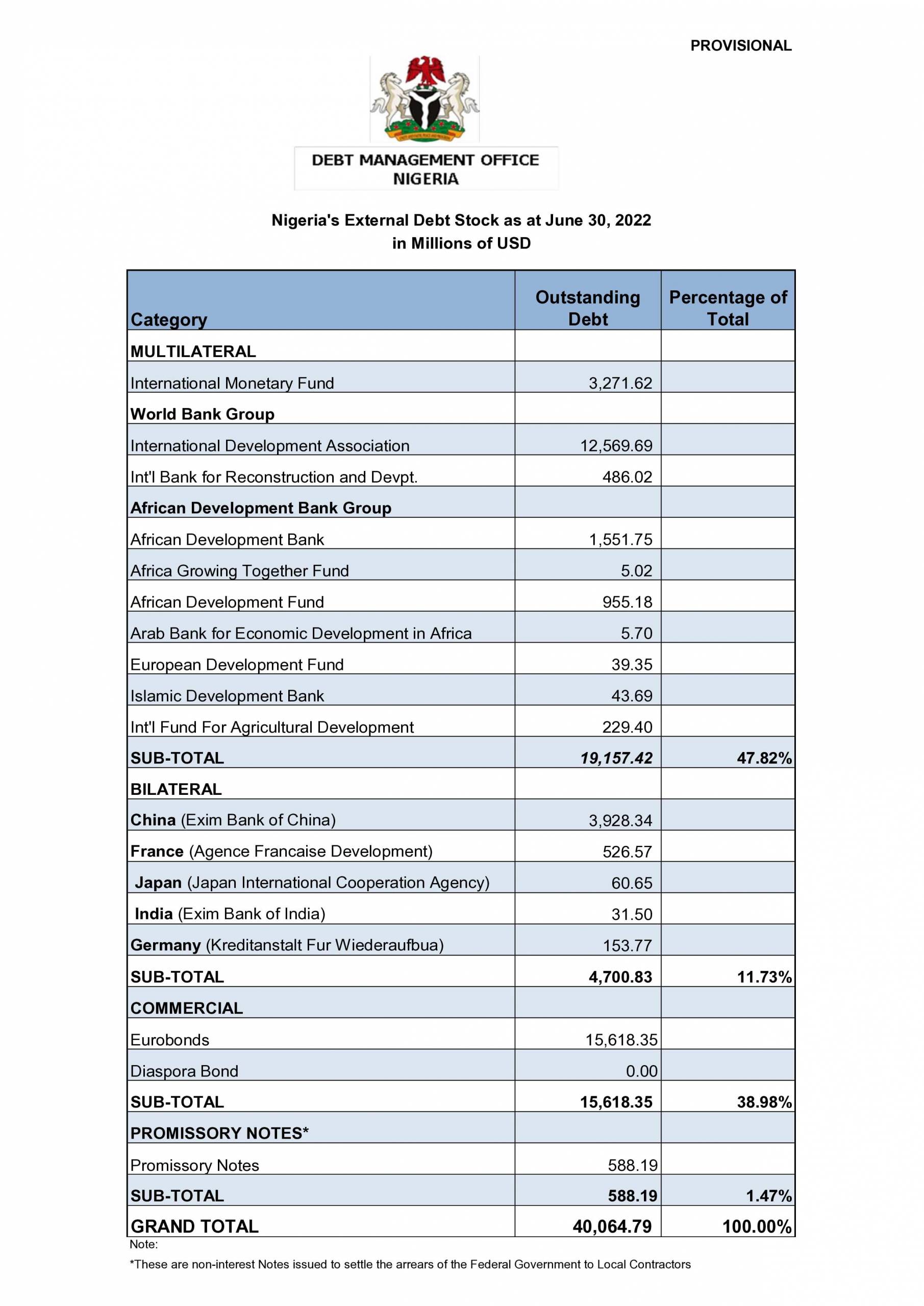 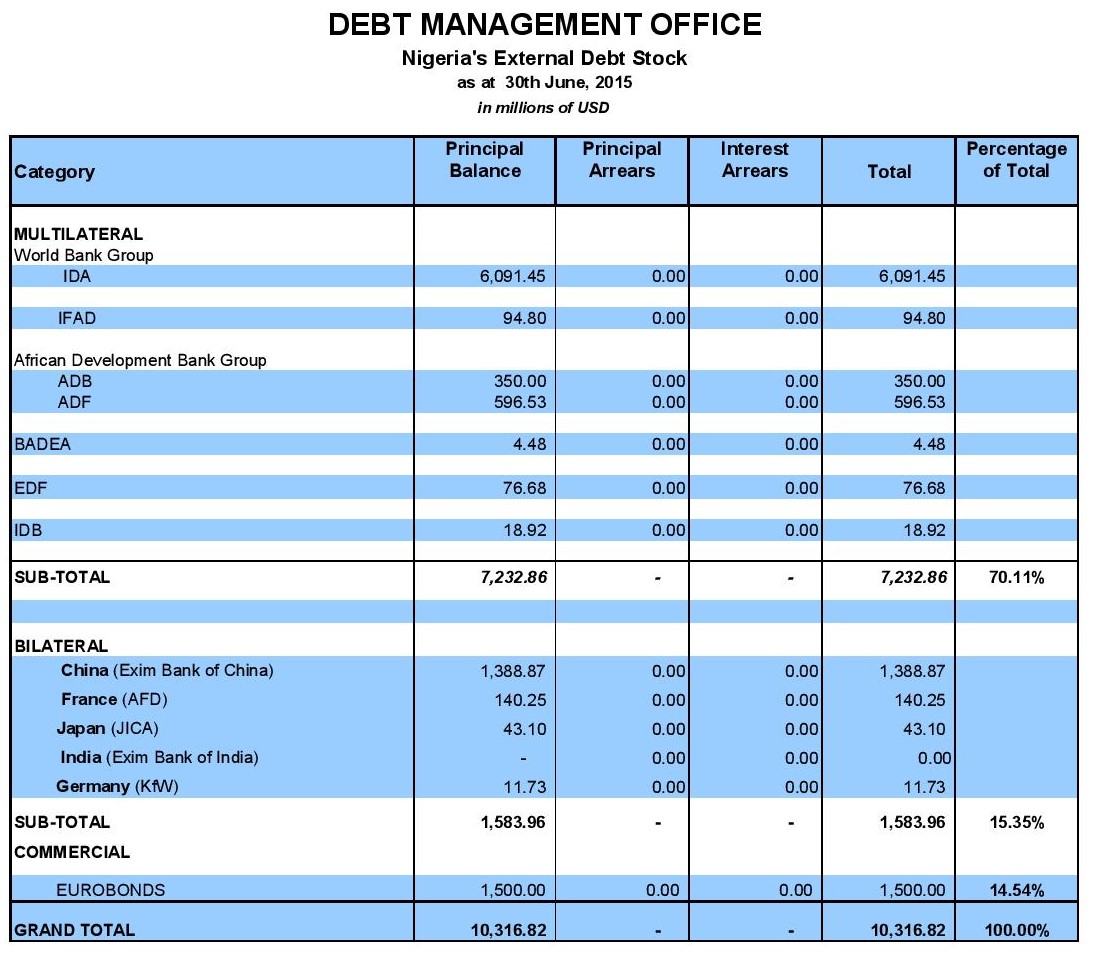 Similarly, domestic debt, which stood at about N8.40 trillion as of June 30, 2015 equally jumped by over 149.4 percent over the last seven years to about N20.95 trillion under the present administration.

The data were contained in the latest profile of the country’s debt stock published by the debt management agency for the end of the second quarter of 2022.

The debt management agency said in its latest report on the FGN Domestic Debt Stock as of June 30, 2022 grew from a total of about N20.144 trillion recorded at the end of the first quarter on March 31, 2022. 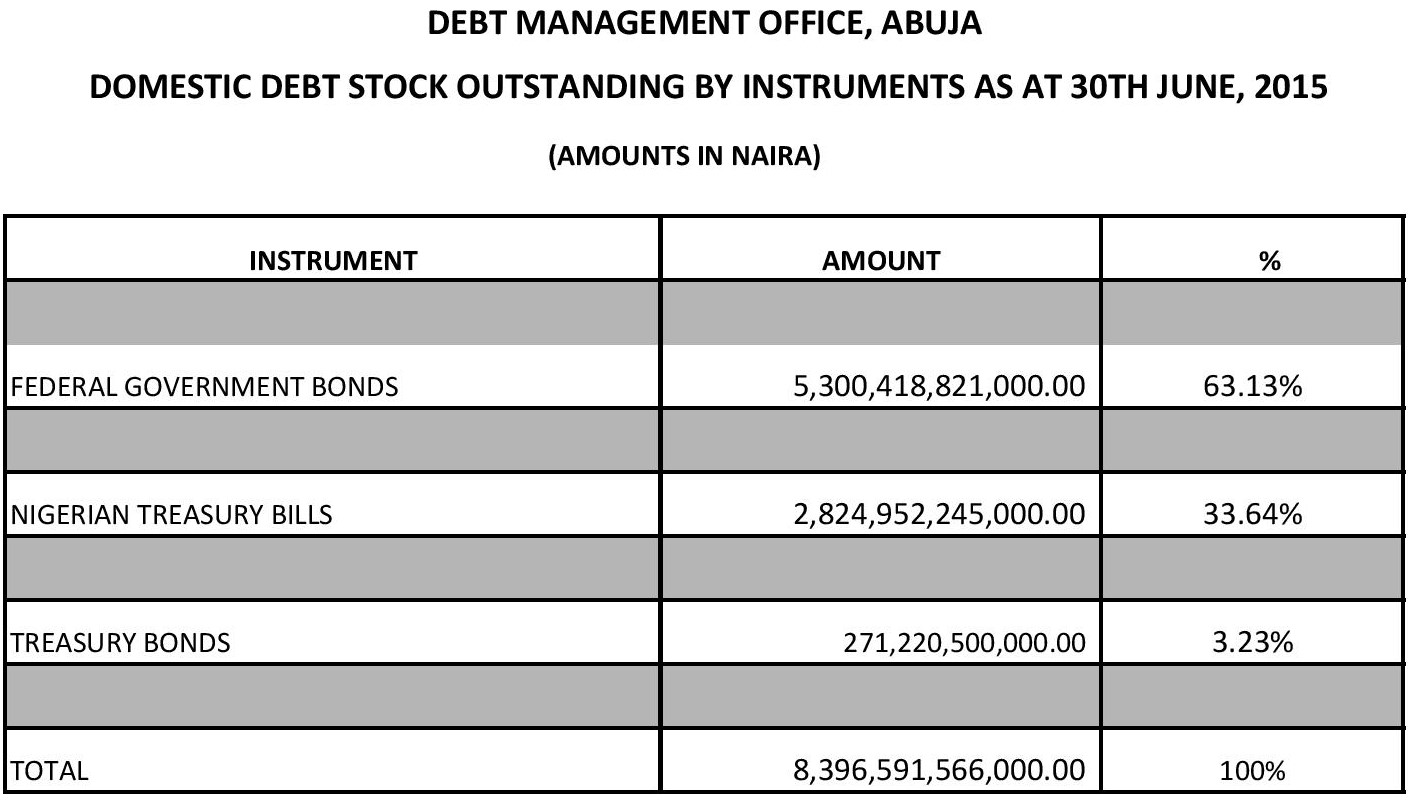 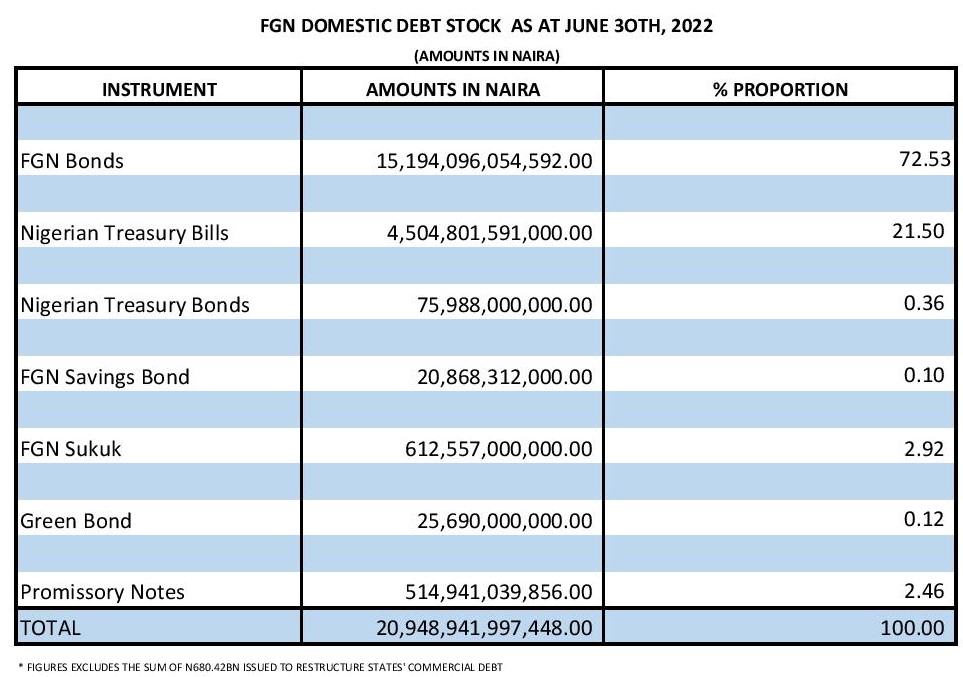 A breakdown of the multilateral debts included those to the International Monetary Fund (IMF) and affiliate financial institutions to both the World Bank Group and the African Development Bank.

While the debt to the IMF stood at about $3.3 billion, debts to affiliates of the World Bank Group included the International Development Association (IDA) $12.57 billion and International Bank for Reconstruction and Development (IBRD) $486 million. 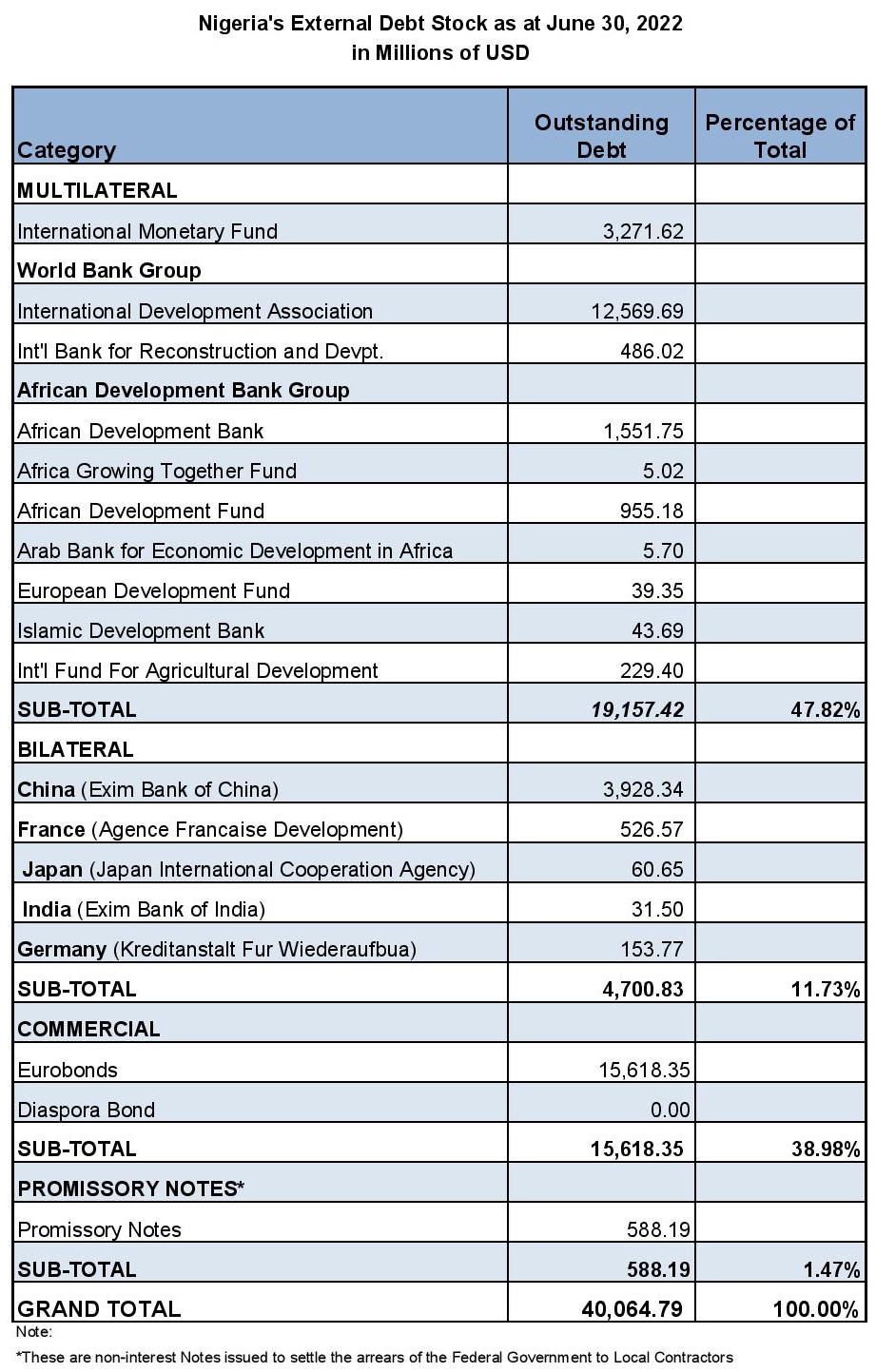 In terms of external debt service payments, the debt management agency said between April and June, 2022, a total of $105.23 billion, or 18 percent was paid to service the debts owed to various multilateral financial organizations, while $35.71 billion, or 6 percent was spent on servicing bilateral debts during the same period, and $457.01 billion, or 76 percent spent on Eurobonds.

Out of a total of N5.28 trillion recorded as domestic debt figure for the 36 States of the Federation and the Federal Capital Territory as of June 30, 2022, the DMO said Lagos State trumped with the highest debt stock of N797.31 billion, followed by Delta State with N378.88 billion, and Ogun State with N241.78 billion. The least indebted states include Jigawa (N45.14 billion), Ebonyi (N59.11 billion) and Kebbi (N60.42 billion). 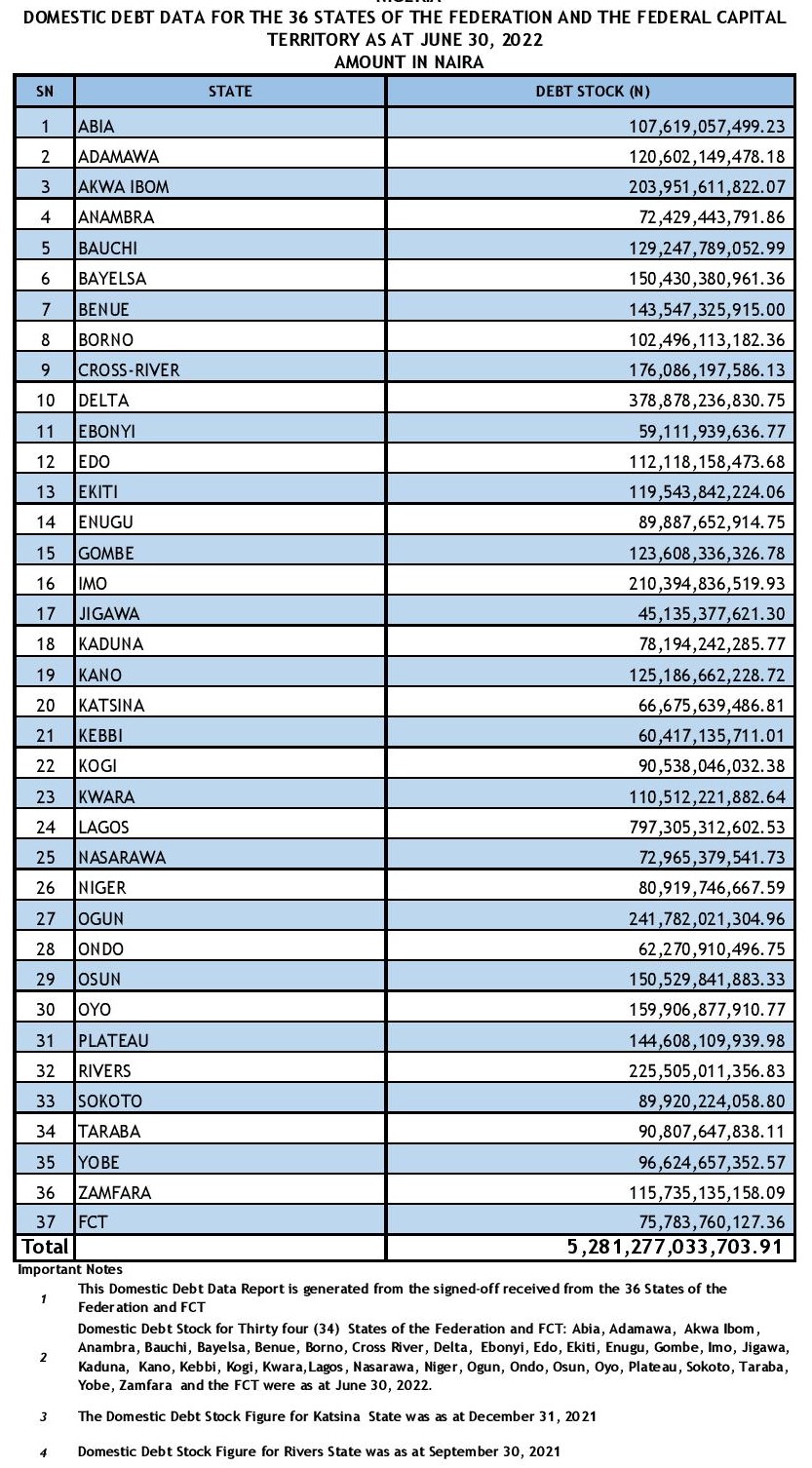