The clock seems to tick faster as the day silently approaches. All eyes are now on the panel of judges, comprising some elders, veterans and high priests of the journalism profession.

Most of them were in practice at the very top long before some of the contestants for the award were born.

The scarcity of easy smile on their faces signposts the undisputable assumption that they mean business.

Last week, these elders made the long expected announcement to unveil details of the contest.

On December 10, 2021, the first winner of the Ray Ekpu Award for Investigative Journalism in Akwa Ibom State would be unveiled.

Whoever wins the prestigious award will go home with a hefty prize of half a million Naira. Something tells me that this is one of the highest financial attachments to journalism award in Nigeria.

When you examine the calibre of people in the award committee, you can be sure a winner will not emerge cheaply.

Most of them are old school journalism veterans with truck loads of professional reputation to protect.

They would even be ready to declare the contest as a no-winner event instead of compromising or settling for anything less than excellence.

On the part of the contesting journalists, the race is gathering momentum. Everyone wants to win the high prize.

In Nigeria of today, five hundred thousand Naira in cash seems like something big enough to take someone to the moon.

Think about school fees, house rents, and hospital bills, among others. I can even hear someone mentioning Christmas celebration. It’s certainly a big deal this season. 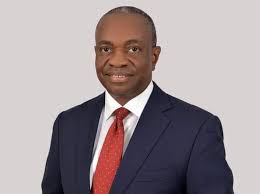 Udom Inoyo
Let’s refresh our minds a little. On the last Friday in July this year, during the annual celebration of the Akwa Ibom Council of the Nigeria Union of Journalists Week, Udom Inoyo, the urbane immediate past executive Vice-Chairman of Exxonmobil Corporation in Nigeria, announced the institution of the “Ray Ekpu Award for Investigative Journalism.” He made the award exclusive to journalists practicing in Akwa Ibom State.

This is how he made the announcement: “I have thought of what I could do as my little contribution to the development of journalism and the NUJ in Akwa Ibom State with regard to this matter (investigative reporting). Anywhere I have gone in this world, when people talk about journalism, one individual comes to my mind first.

“He is a great son of Akwa Ibom State, an international award-winning journalist, who rose from a position of insignificance to that of global prominence. It is in honour of this high priest of quality reporting that I hereby request the Executive Committee (of the NUJ in Akwa Ibom State) to accept the institution of an annual award to be called: “The Ray Ekpu Award for Investigative Journalism.”

“This award, to be given out annually by a panel of five first-class journalists, comprising two celebrated veteran journalists; one national officer of the Nigerian Guild of Editors; a nominee of the award sponsor, and the State Chairman of the NUJ, is aimed at encouraging quality, factual investigative reporting in Akwa Ibom State and Nigeria at large.”

He went ahead to mention the prize money, five hundred thousand Naira yearly for the winner, and added: “But the journalist must be operating from Akwa Ibom State.” That automatically disqualified some of us in the Diaspora.

As I stepped out of the Press Centre in Uyo that evening, I put a call to Ray Ekpu to tell him about the award. His response, in his trademark deep baritone, after a few seconds of reflection, stunned me.

He said, “I know Udom Inoyo closely. But Sam, I have never done anything special for him to deserve this kind of honour. This is purely from a heart of love. I’m glad to be so honoured by someone who has never placed a demand on me. I am greatly delighted.”

Shortly after the announcement, there was a perceived long silence. People started wondering when the award would begin. Some of us actually knew that something was unfolding in the background.

A few weeks ago, the Award Committee, led by the former editor of the defunct Concord newspapers, Nsikak Essien, met. The appointment of Nsikak was well received by professionals who know something about his professional pedigree.

Other members are Kayode Komolafe (we call him KK), a sound gentleman columnist and deputy managing director of Thisday newspapers; Akpandem James, a veteran of the Concord, Punch and Daily Independent newsrooms; Professor Ini Uko of the University of Uyo; Amos Etuk, the Chairman of the Akwa Ibom State Council of the NUJ, and Mrs Emem Nkereuwem, representing Inoyo Toro Foundation, as advisor.

The Committee has already issued guidelines for the award. It says each entry for the award would be assessed based on depth of investigation; conformity with the ideals of journalistic excellence; style and language of presentation; its contribution to good governance in public office, and its impact on the fight against corruption and impunity.

Other criteria are contribution of the report to national unity and ethnic cohesion in the state; promotion of human and individual rights; its relevance to the fight against societal ills like rape and girl child abuse; efforts to check poverty and abuse of the environment, and attempts to check drug abuse, cultism and general insecurity.

So, who wins this award? Is someone ready to cook up something in the mould of what a certain Janet Leslie Cooke did in 1981 to win the prestigious Pulitzer Prize while working for the Washington Post newspaper?

Cooke, a black American reporter, born on July 23, 1954, fabricated a story about an eight-year old boy claimed to be a heroin addict.

The story was so beautifully cooked up with all the best ingredients of sound journalism, except factuality, that not even the legendary editor of Washington Post, Ben Bradlee, noted for his professional dexterity in handling of the Watergate Scandal, could detect any foul play.

Eventually Ms Cooke was found out. For the first time in history, a winner of the legendary Pulitzer Award was forced to return it.

The Cooke case should serve as an object lesson to the Committee for the kind of things it must guard against. Somebody somewhere is ready to win this award by all means. I would rather advise that if nobody qualifies for the award at the end, it must be so declared. The rules must be adhered to.

Both the Committee and those vying for this high profile award must respect the man whose name this award bears. That name must not be corrupted. The Committee members themselves must protect their integrity. We are watching. We are monitoring. Nothing must be done to devalue the award in anyway.

Another concern! Journalists working for online newspapers are exempted from this award. In this age and time, the Committee must have strong reasons for doing that. If there is any, for some reasons, we deserve to know. Why should online newspapers be exempted?

Despite noticeable professional waywardness, Nigeria boasts of some credible online newspapers. Some of them are published by former editors of national newspapers. I do not need to mention names here. But if certain international and local journalism award-giving bodies recognise and give awards to outstanding reporters from these online newspapers, why should our case be different?

I am not aware that Udom, who instituted the award, asked the Committee not to recognise credible, fully registered online newspapers. I think there is need for a rethink here. For avoidance of doubt, I do not operate any online newspaper. What is fair is fair!