MEDIATRACNET
Cumulative under-recovery and value shortfall by the Nigerian National Petroleum Corporation (NNPC) between February and May, 2021 stands at about N389.49 billion, the June 2021 edition of the corporation’s monthly report on remittances to the Federation Account Allocation Committee (FAAC).
Details of the report revealed total under-recovery or losses and value shortfall, otherwise called fuel subsidy, for the importation of 1,885,501,312 litres of premium motor spirit (PMS), popularly called petrol stood at about N127.41 billion in May. 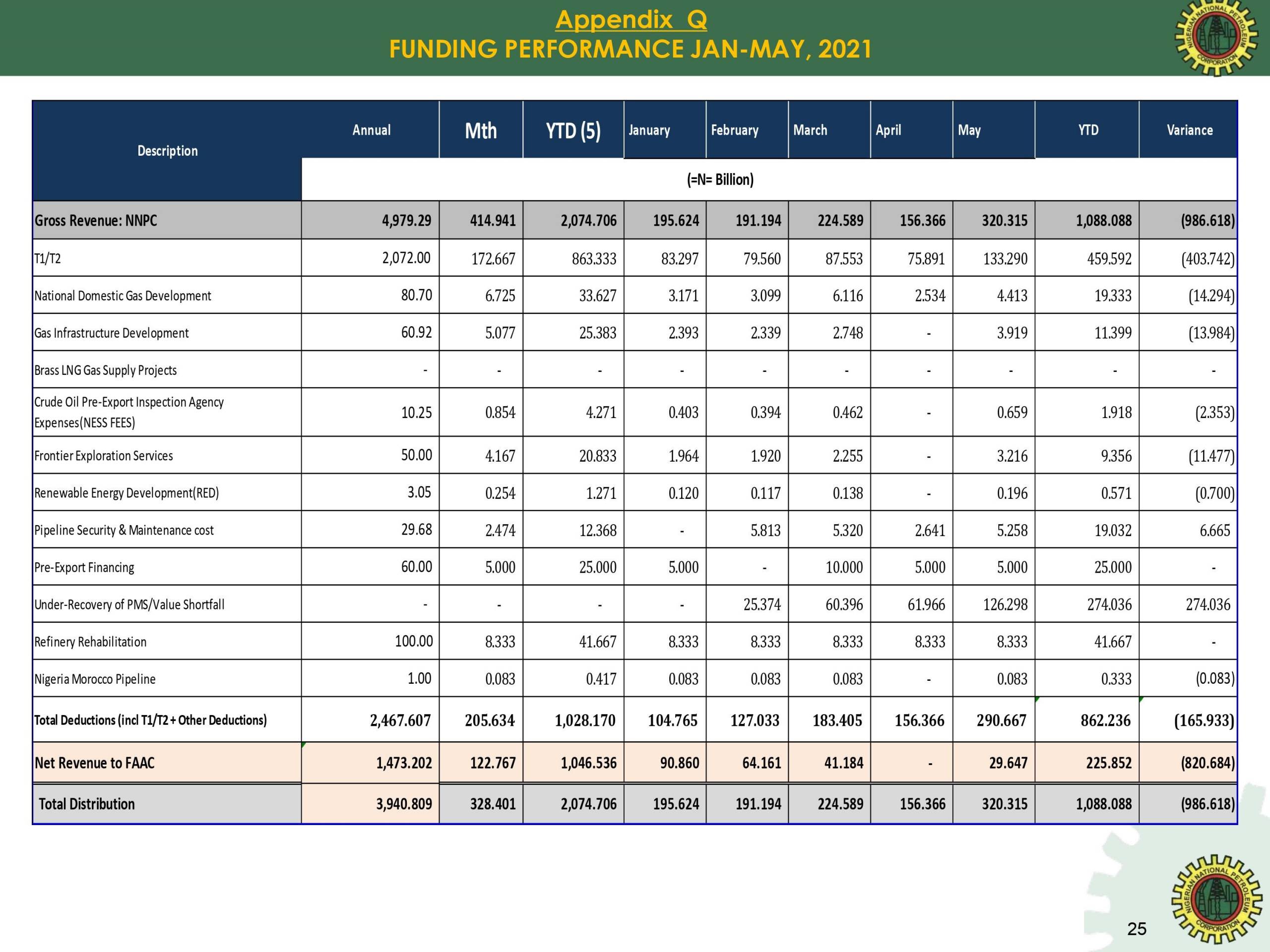 Some of the losses were reported by some indigenous petroleum products marketers who were among the 35 local and international companies involved in the importation programme along with the NNPC.
They include Sahara Energy, MRS Oil, Duke Oil, Matric Petroleum, Bono Eterna, Oando, AYM Shafa, Atlantic Petroleum, Arkleen and Mocoh.
Details contained in the report showed that Eterna recorded the highest loss of N13.6billion; Total N11.6billion; Oando N9.6billion; MRS N7.5 billion; Duke OIl N6.4 billion; AYM Shafa N5.9 billion; Atlantic N5.3 billion; Arkleen N4,3 billion; Matric N3.5billion, and Sahar N1.4 billion.
The losses and shortfall were as a result of the difference in prices between the landing cost and ex-coastal price incurred by the NNPC on the importation of the product in April 2021. 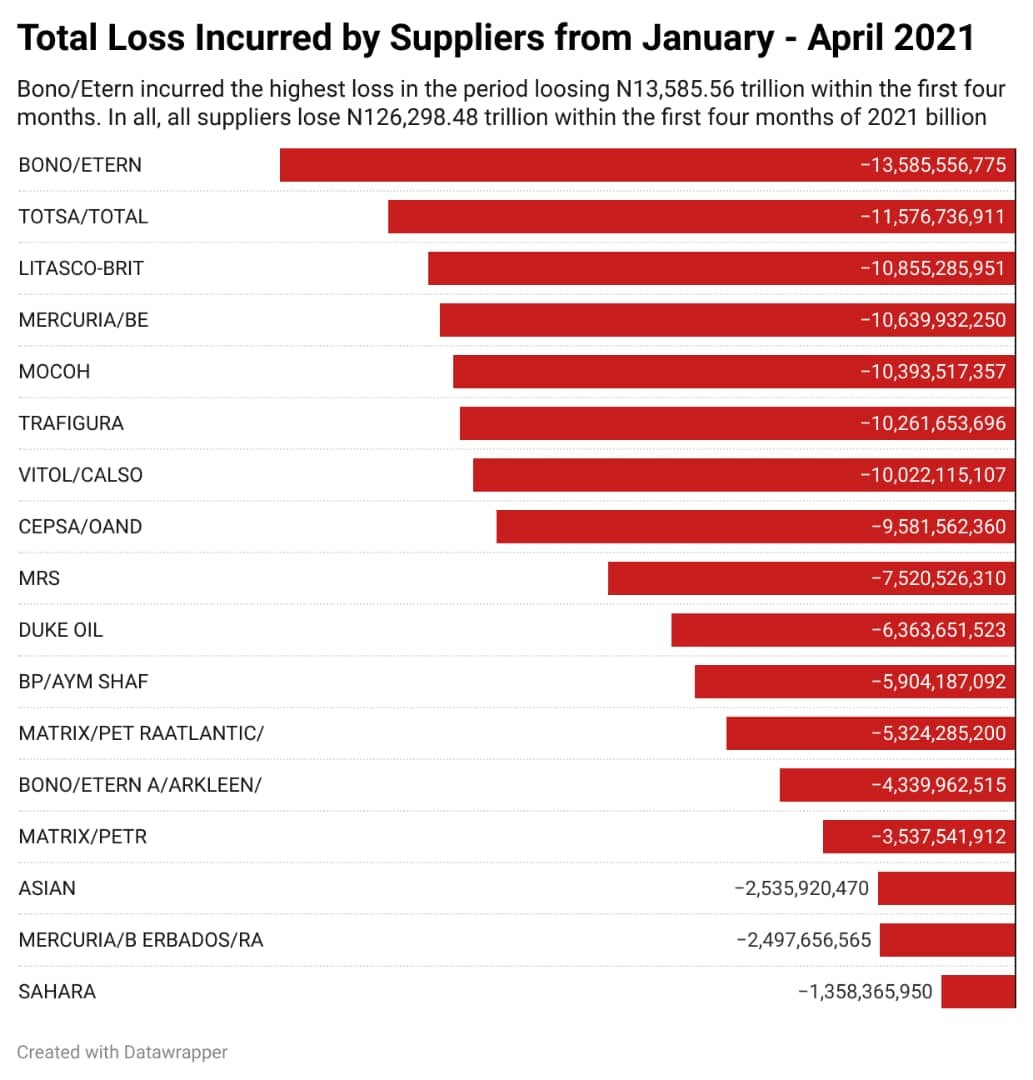 The report published on the corporation’s website showed the figure consisted of about N1.11 billion recorded as a result of petroleum products losses through NNPC’s import operations, in addition to N126.30 billion incurred as the corporation’s value shortfall.
The shortfall in May (N127.41billion) is the highest since under-recovery or fuel subsidy found its way back in the petroleum products pricing template after the Federal Government announced its removal in April 2020.
Since April 2020, the first time the NNPC captured under-recovery as part of its cost recovery items in its operations was last February, when it reported it incurred about N25.37 billion in its fuel import programme.
In March 2021, the under-recover/value shortfall rose to N60.40 billion, and N61.97 billion in April, before spiraling to N126.30 billion in May. The NNPC estimates the figure might go up to about N274.04 billion in June and beyond.
But notes to the executive summary accompanying the report said the additional value shortfall of N114.34 billion incurred for May 2021 would be deducted from the June 2021 Federal Account proceeds during the July 2021 FAAC meeting.
Besides, the report said the balance of N50 billion was still outstanding as the value shortfall for March 2021.
A review of the report showed the losses and value shortfall figures were part of a total deduction of $175.15 million, or N188.84 billion, consisting of JV cost recovery of N57.28billion; strategic Holding Cost N304.18 million; pipeline operations, repairs and maintenance cost of N3.84 billion; product losses N1.11 billion, and NNPC shortfall N126.30 billion.
After deducting a total $175.15 million from the $220.20 million, the report said about $45.05 million, or N8.58 billion was the amount available for payment and remittance by the corporation to the FAAC for government priority projects and distribution to the three tiers of government as statutory allocations.
The breakdown of the available figure, also included N9.01 billion as oil royalty from the Department of Petroleum Resources (DPR), N16.13 billion as taxes from the Federal Inland Revenue Service (FIRS) and N13.47 billion as NNPC Profit transferred to the Federation Accounts profit-sharing contract (PSC) and miscellaneous.
A summary of the April 2021 crude oil and gas sales receipts in May 2021 showed the NNPC lifted a total of 9.42million barrels of crude oil during the month, consisting of 2.78 million barrels of export oil (30 percent), and 6.65million barrels of domestic crude oil (70 percent).
The figure showed an increment by 23.59 percent compared to about 7.62 million barrels lifted in March 2021.
Total earnings from crude oil sales for April, the report said, should have been about $616.04 million, or N235.82 billion, consisting of about $181.19million, or N69.36 billion, from exports, and $434.85 million, or N166.46 billion, from domestic crude oil, at approved exchange rate by the Central Bank of Nigeria (CBN) of about N382.80 to the dollar. 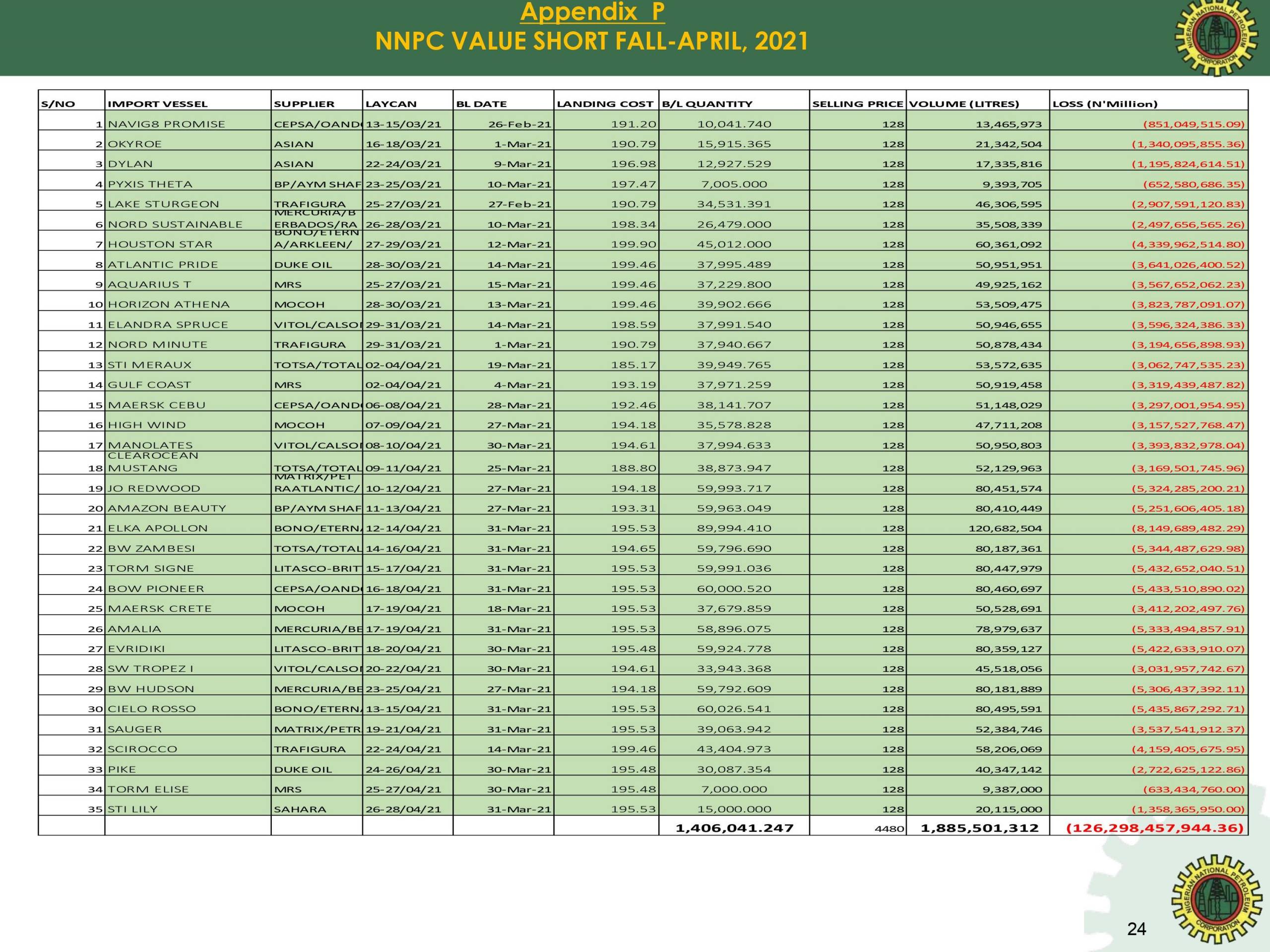 EDITOR’S NOTE: This material was edited to accommodate additional information and data