Revenue generating agencies in the country remitted over N1.5trillion into the Federation account in the first quarter of 2021, the Chairman of the Revenue Mobilisation Allocation and Fiscal Commission (RMAFC), Elias Mbam, disclosed.
The Chairman of the Commission, Elias Mbam, disclosed this while receiving the Revenue Performance report from the Post-Mortem Sub-Committee of the Federal Account Allocation Committee (FAAC) in Abuja.
He gave the exact figure as N1,538,021,801,518.37.
The report showed that the Federal Inland Revenue Service (FIR) made the highest remittance of more than N759. 9billion (N759,857,249,035.40), followed by the Department of Petroleum Resources (DPR) with N452.5billion and Nigeria Customs Service (NCS) N275.7billion. 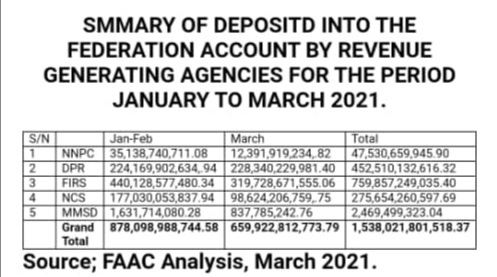 The Nigerian National Petroleum Corporation (NNPC), which has always been the main source of revenue for FAAC, remitted only N47. 5 billion.
The corporation has in recent times pleaded pressures from the payment of the huge fuel subsidy liabilities, which it says, has seriously limited its capacity to deliver on its obligations to the Federation Account during the period.
During the period,  we learnt,  the DPR, stepped in to bailout the Federation Account with revenues realized from the proceeds from signature bonus paid by bidders in the recent 2020 marginal oil field bid round.
The report also showed that the Ministry of Mines and Steel Development (MMSD) remitted  a total of N2.5billion for the period.
The Chairman further disclosed that more than N496.4 billion was remitted into the Federation account as value added tax (VAT) for the first quarter of 2021.
This, he said, surpassed the targeted tax revenue by more than N36.8million, representing 108.01 percent for the period under review.
On recoveries of outstanding arrears due to the Federation Account, the RMAFC Chairman  said the Commission in collaboration with the Post-Mortem Sub-Committee of  FAAC also received an arrears payments totaling more than N260,137,577,128.01.
This, the Chairman said, is in addition to more than N845,123,857,566 that the Sub- Committee recovered in the year 2020.
Mbam noted that RMAFC was committed in its effort to increasing revenue generation into the Federation account and equitable distribution of the accrued revenues to the three tiers of government.