The award of contracts for the execution of projects valued at about N72 billion by the Ekiti State government fell below standard open contracting principles, investigations by Dataphyte have revealed.
The award of a contract worth over N50 billion (₦50,169,805,561.91) for 200 separate projects was observed to be without the names of the contracting firms purported to have won the awards.
Also, the award of the contracts clearly flouted fundamental open contracting procedures and other breaches of standards in the contract award report published recently by the state government.

As of August 1, 2021, Ekiti State Bureau of Public Procurement published on its website information for the award of contracts for the execution of 1,103 projects relating to works, goods and consultancies.
Based on the data on the portal, the budgeted amount for these 1,103 projects was N869.8 billion (869,775,321,718.71).

An open contracting advocate, Akintunde Babatunde, commended the bureau for its efforts to reduce the potential waste of scarce resources of the state if the contracts were awarded based on the budgeted amounts. Yet, he expressed worry at the magnitude of the difference, saying two things could have been responsible.

The wide margins, he noted, could have been clear cases of inflated budgets by the various ministries, agencies and departments in Ekiti State, or could have resulted from a lack of proper scrutiny by the State Assembly that passed the outrageous budgeted amounts for projects in the first place.

Further analysis of the Ekiti contracts data showed that contracts published on the government website valued at about N21.9 billion (N21,918,434,135.19) had no Open Contracting Identification (OCID) to identify or reconcile the procurements with the contractors in the future.

The global standards for publishing public contracts information are known as the open contracting data standards (OCDS). This is promoted internationally by the Open Contracting Partnership (OCP) and by the Public and Private Development Centre (PPDC) in Nigeria.

An important feature of an OCDS compliant reporting platform or website is that each contract information should have a unique identifier. This is usually referred to as an OCID. According to the OCP, the OCID is a globally or locally unique identifier used to trace a project through all the stages of its contracting process.

Besides, the billions of Naira worth of projects without unique identifiers, at least four projects with a total contract cost of N606.66 million (N606,663,711.78) had no information on the date or fiscal year of their contract award.

Though the Bureau indicated the fiscal year that 99 percent of the projects from 2005-2020 were awarded, it did not publish the same details for the 2021 fiscal year.

Also, data showed the possibility that the projects had no appropriation by the Ekiti State Assembly. This is because no initial approved budget value was provided on the portal. 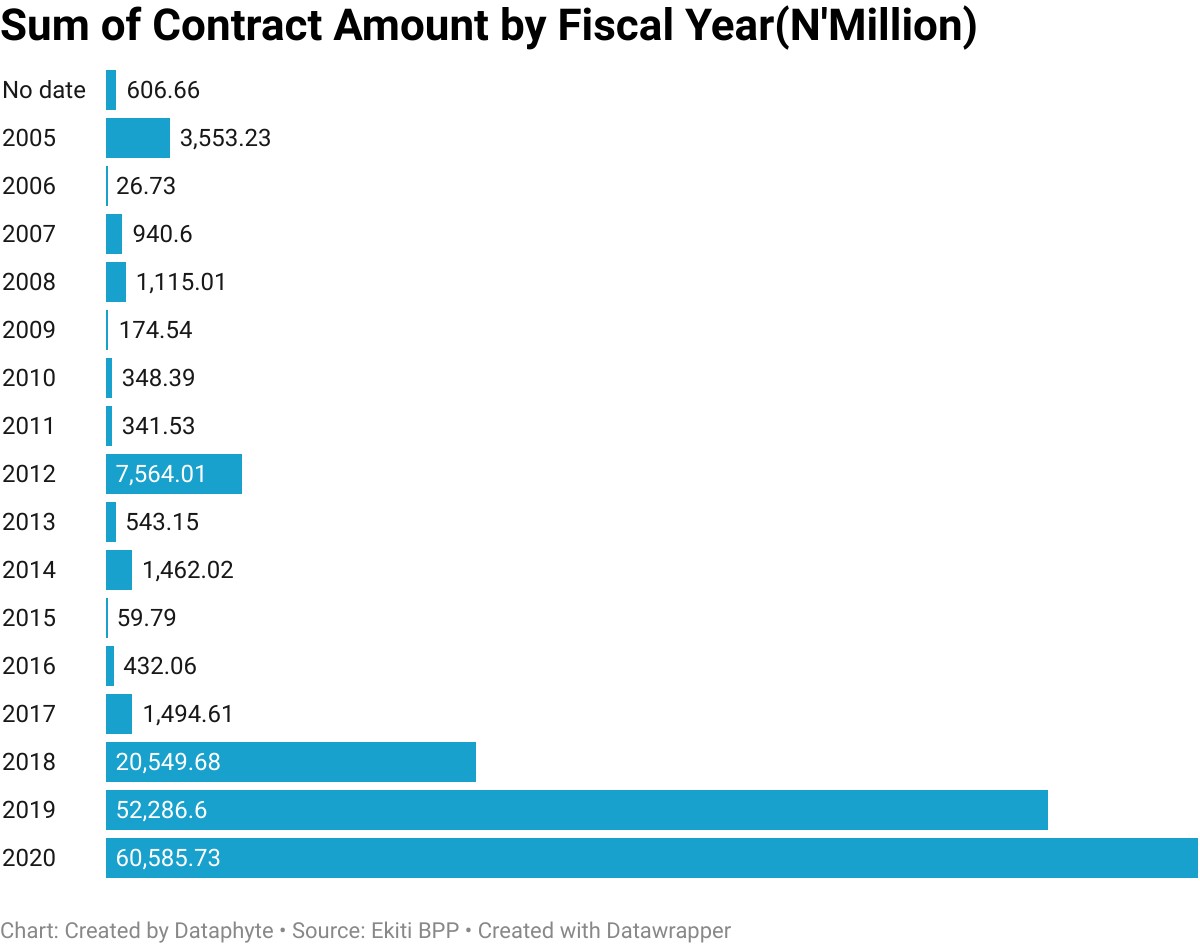