Despite belonging to the elite group of states receiving the highest allocations from the Federation Account every month, the borrowing spree by the Akwa Ibom State government is steadily moving it towards the top of the infamous debt pyramid, Policy Alert, a civil society group working on ensuring fiscal justice in the Nigerian society, has said.
The group said it arrived at its position after reviewing the rising debt stock of the State government and the high rate of its continuous borrowing, which puts it at the third position in the Federation.
The group’s Communications and Stakeholder Engagement Officer, Nneka Luke-Ndumere, said on Tuesday that the recent approval by the Akwa Ibom State House of Assembly of Governor Udom Emmanuel plan to borrow a total of N7 billion would move the state’s debt profile to close to N240billion.
Details of the latest debt acquisition plan showed the state government planned to use about N2 billion for the development of the agricultural sector, while N5 billion would be channeled towards the housing sector.
Luke-Ndumere said engaging in unrestrained loan acquisition spree despite its aggravating debt situation sets the state government on the path towards unsustainable debt profile.
Describing the loans spree by the state government as ill-advised, the group said acquiring fresh N7 billion loan at a time the domestic debt profile of the State already stands at over N232 billion as of March 2021 would make the State as one of the three most indebted among the 36 States of the federation and Federal Capital Territory.
Apart from Lagos State with total debt profile of about N507.4 billion and Rivers State with about N266.9billion, Akwa Ibom is next with about N232.2billion out of a total sub-national debt stock of N4.123trillion.
The data are contained in the latest ranking of the domestic debt profile of the 36 State governments and the FCT published by the Debt Management Office on its website as at March 31, 2021. 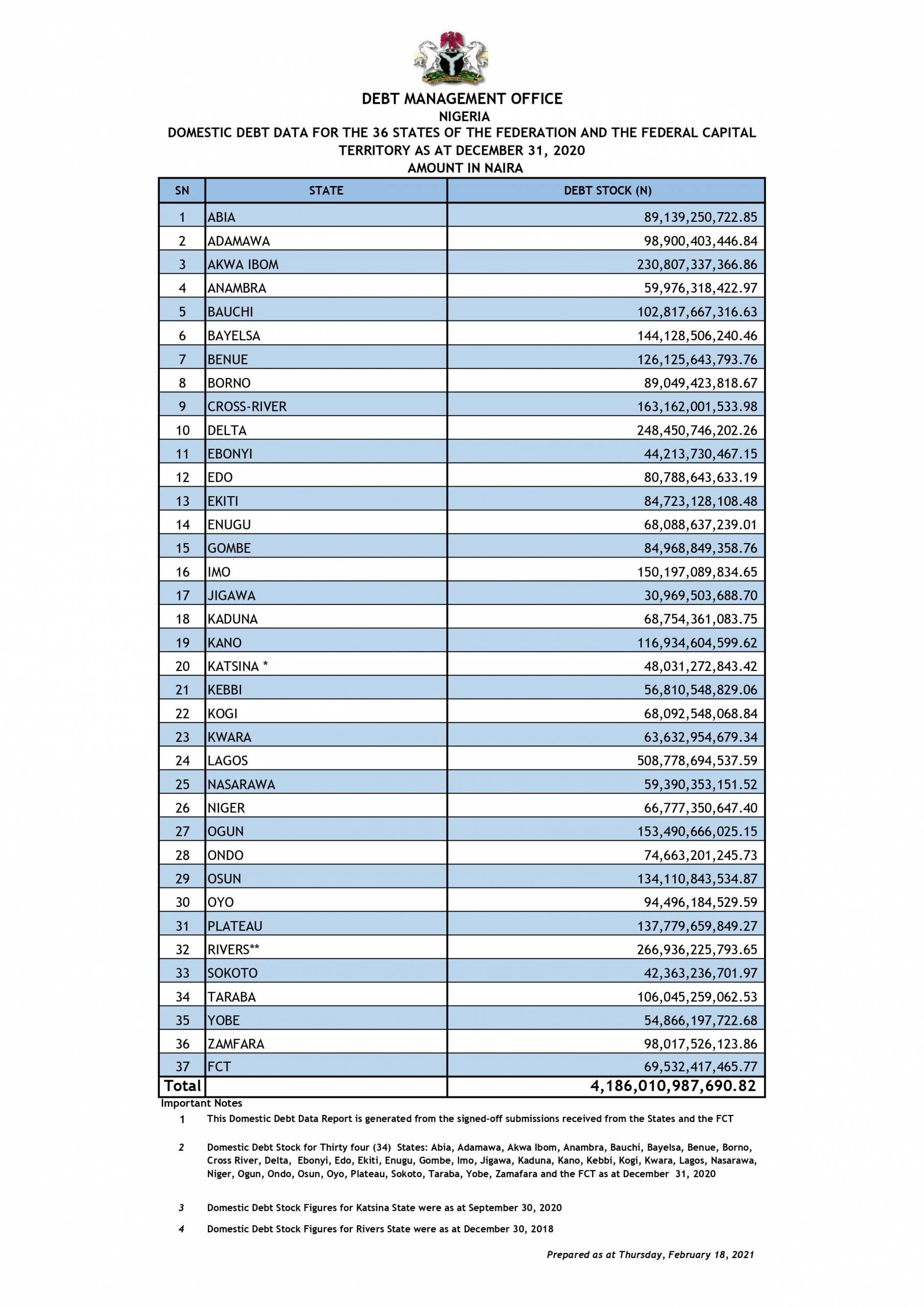 With the latest request by the State government for the approval by the State Assembly of additional N7 billion loan, the State government would steadily be moving closer to rivaling its Rivers State neighbour.
Luke-Ndumere said the bulk of the total N7 billion fresh loan approval for the State government, was in breach of the Akwa Ibom State Fiscal Responsibility Law 2021, which demands that the State must justify the loan by providing details of the cost-benefit analysis of the loan it is seeking.
“The Fiscal Responsibility Law, which should guide the State in all fiscal matters, including loans and debts accumulation, provides that the State Government shall not only specify the purpose for which every borrowing is intended, but must also expressly and convincingly present a cost-benefit analysis detailing the economic and social benefits of the purpose to which the intended borrowing is to be applied,” she said.
“In requesting for the loan, the state government failed in its fiscal responsibility by not providing these prerequisites for loan acquisition. The House of Assembly on its part also failed in its over-sight/monitoring responsibility, by approving the loan request without adequately interrogating the state government against the provisions of a law it made recently.
“We must understand that there is a very questionable trend of loan acquisition in the State which makes the debt profile of the State very close to being unsustainable, because these loans are not self-liquidating. Instead, the state government would pay huge interests on these loans.
“Do not forget that in 2019, which was an election year, the State government acquired loans to the tune of about N48 billion. In 2020, it acquired another N7.8 billion. Now, in just half part of the year, another N7 billion has been approved by the State Assembly for acquisition. You can now predict the expected trend before the end of the fiscal year. We cannot continue with this trend of frivolous loan acquisitions,” Luke-Ndumere said.
Luke-Ndumere quoted a report and Audited Financial Statements for 2019 from the Office of the Accountant General of the Federation, which showed the State government spent a whooping N12.2 billion on payment of interest on various loans.
“As of January 1, 2019, the state’s outstanding loans stood at just N93 billion, but the debt stock has now risen to N232 billion, excluding the N7 billion approved last week. Imagine the enormous social opportunity cost of future loan repayments,” she said.
In 2020, Luke-Ndumere said the state government spent about N25.2 billion on loan repayments, with over 40 percent of that amount spent on servicing interest rates on internal loans.
“It is alarming to imagine the lives that could have been touched by the billions of naira wastefully spent servicing loans over the years and the possible uses of the money that would be spent servicing future loans as the state’s debt profile continues to rise,” she lamented.
She further expressed worry that all the loans were taken from commercial banks at non-concessional interest rates, a situation that would eventually translate to huge debt burden to successive administrations and generations to come.
The group urged the state House of Assembly to redeem its image by reviewing its decision on the loan approval without delay.