Idiots, across the country, had a conference recently in Uyo, Akwa Ibom State. They discussed every nonsense under the sun, including the difference between “apu” and “fufu”, words and actions, promises and debts, working-government and walking-government!
Well, I was not invited to the meeting, but I was told the idiots actually spent precious time debating why idiots should be spelt as i-d-i-o-ts!
The reason I wasn’t invited was that my friend, who happens to be the Secretary-General, claimed I was a counterfeit. He claimed only certified and chartered idiots were invited.
He admitted that, well, I qualified/qualify to be called an “idiot”, no doubt. But since Emmanuel was yet to sign my certificate of occupancy (C-of-O) to the prestigious office of an idiot, I was not yet a licensed idiot. Yet, he went ahead to furnish me with details of discussions at the conference. I swear I have the video!
First, he said the choice of Uyo as the host was because Gov Udom Emmanuel willingly identified Akwa Ibom as a state dominated by NAFDAC-certified idiots, way back in 2017. Fact is, the governor had described his critics then as idiots and threatened to unleash the youths on the former. And, oh, the “idiots” who gathered in Uyo recently were members of a group called “Individuals Dying Installmentally of Treatable Stupidity”!
The conference started with the chairman’s remark. Sounded as pointless as Senate President Lawan telling Nigerians from Aso Rock, after fresh fish and tuwo, that the country will change for the better in two weeks. He left his job to usurp Baba’s own. Even an idiot knows how to focus on being an idiot! See confusion!? Yes, the chairman’s speech also sounded as hopeless as Buhari’s empty assurance on security! But the handsome chairman of idiots, who kept smiling at his reflection on the reading stand, spoke on.
CHAIRMAN:
“Being a known idiot is advantageous. No one can blame you too much for being ignorant of anything or everything. And in court, you can plead like a drunkard that you did or spoke any nonsense ‘under the influence’ (of idiots?). Ok, so all idiots in attendance should speak according to their stomach aches. And those with special mouth odour will be excused if they won’t be bold enough to speak up against the societal ills. Since Akwa Ibom has claimed the headquarter of idiots, the analysis and stupid talks should focus mainly on the state”. 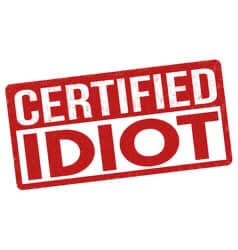