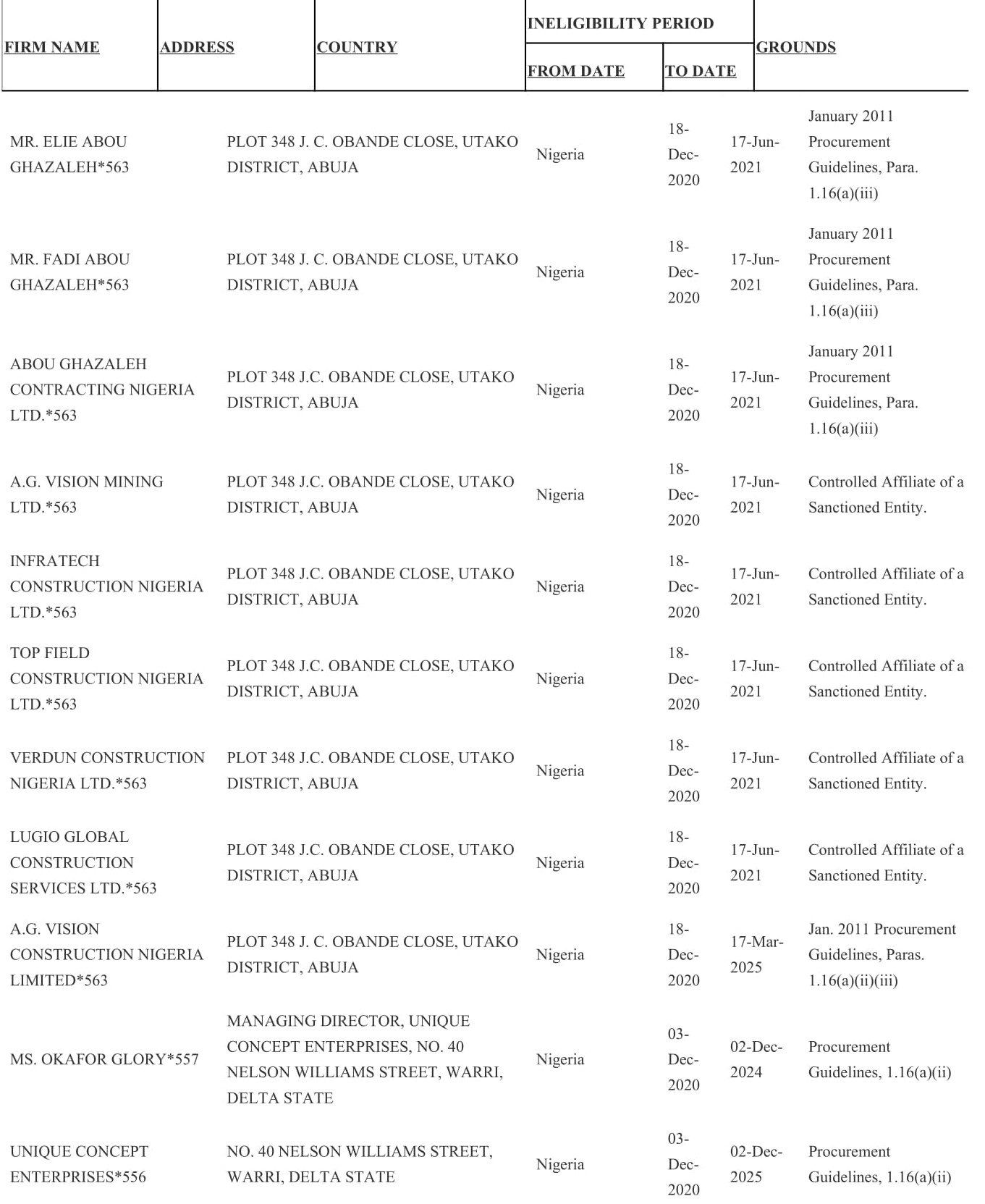 The companies are subsidiaries of Abou Ghazaleh Group incorporated in 2002 to handle construction and mining services in various parts of the country.
Incidentally, A.G. Vision Mining incorporated in 2007 is a contracting firm that has been involved in the execution of many building constructions, water dams, water purification stations, irrigation and soil erosion projects in various parts of Nigeria, including Kogi, Adamawa, Cross River, Benue, Anambra, Abia, Imo, and Katsina.
Also, the affected companies include Infratech Construction Nigeria Limited, involved in the mining of coal and lignite; Top Field Construction Nigeria Limited. incorporated in Yenagoa, Bayelsa State and registered on June 10, 2015.
Other affiliate companies also of the same business address, Plot 348 J. C. Obande Close, Utako District, Abuja. include Verdun Construction Nigeria Limited; Lugio Global Construction Services Limited, incorporated in Ikot Ekpene, Akwa Ibom State and registered on June 10, 2015, and A.G. Vision Construction Nigeria Limited.
The directors were blacklisted and barred from further performance of any World Bank-funded contracts in Nigeria for violating the January 2011 Procurement Guidelines, Para. 1.16(a)(iii)
The World Bank said the sanctions were for the “fraudulent and collusive practices” in the execution of the Nigerian Erosion and Watershed Management Project in line with the Sanctions Board Decision No.130 of December 18, 2020.
The World Bank said those accused of committing fraud and corruption violated Paragraph 1.16a (ii) and (iii) of the Guidelines for the procurement of goods, works, and non-consulting services under the World Bank credit and grants agencies, namely the International Bank for Reconstruction and Development (IBRD) loans and International Development Agency (IDA) by borrowers.
Under the bank’s policy, borrowers (including beneficiaries of bank loans), bidders, suppliers, contractors and their agents, subcontractors, sub-consultants, service providers or suppliers, and other personnel are required to observe the highest standard of ethics during the procurement and execution of Bank-financed contracts.
The bank defines corrupt practice as the act of “offering, giving, receiving, or soliciting, directly or indirectly, of anything of value to influence improperly the actions of another party,” while fraudulent practice is “any act or omission, including a misrepresentation, that knowingly or recklessly misleads, or attempts to mislead, a party to obtain a financial or other benefit or to avoid an obligation.”
“Collusive practice”, the World Bank said, is an arrangement between two or more parties designed to achieve an improper purpose, including to influence improperly the actions of another party;
Also, the charge of fraud and corruption involving violations as spelled out in Section 1.23 and Consultant Guidelines, 1.22(a)(i) of the guidelines for the selection and employment of consultants under IBRD loans and IDA credits and grants by World Bank borrowers.
Under the policy, the bank requires borrowers (including beneficiaries of its loans), consultants, and their agents, sub-contractors, sub-consultants, service providers or suppliers, and other personnel to observe the highest standard of ethics during the selection and execution of Bank-financed contracts.
The debarred companies and individuals may be released from being ineligible for consideration for World Bank contracts if they demonstrate to the Bank Group’s Integrity Compliance Officer that they have complied with the conditions that resulted in their sanctions and have taken appropriate remedial measures to address them.
A.G. Vision Construction Nigeria Limited was sanctioned for violating the January 2011 Paragraphs 1.16(a)(ii)(iii) of the Guidelines: (worldbank.org) was declared ineligible to handle any World Bank contract for the period between December 18, 2020 March 17, 2025.
The other individual, a Nigerian, indicted for violating the Procurement Guidelines, 1.16(a)(ii) was the Managing Director of Unique Concept Enterprises, Okafor Glory of No. 40 Nelson Williams Street, Warri, Delta State, blacklisted for the period between December 3, 2020 and December 2, 2024.
Unique Concept Enterprises was accused of the same offence and sanctioned for the period between December 3, 2020 and December 2, 2025.