More than 65 percent of the over N10.13 trillion aggregate revenue to fund the 2022 budget is projected to come from non-oil sources (including government-owned enterprises (GOEs), the Minister of Finance, Budget and National Planning, Zainab Ahmed, has said.

The Minister who presented an overview of the revenue framework on where the revenue in the 2022 Budget would come from on Friday said about 34.9 percent of the total projected revenue is expected from oil-related sources.

Details of the N3.15trillion share of oil revenues, the minister said, include N187.4 billion as dividend payment from the Nigeria LNG and N8.32billion from the Bank of Industry, while revenues from minerals and mining would be N2.92billion.

In terms of non-oil tax revenues, the minister said the highlights from the overview of the revenue framework showed a total of N2.13trillion is being expected by the government during the year. 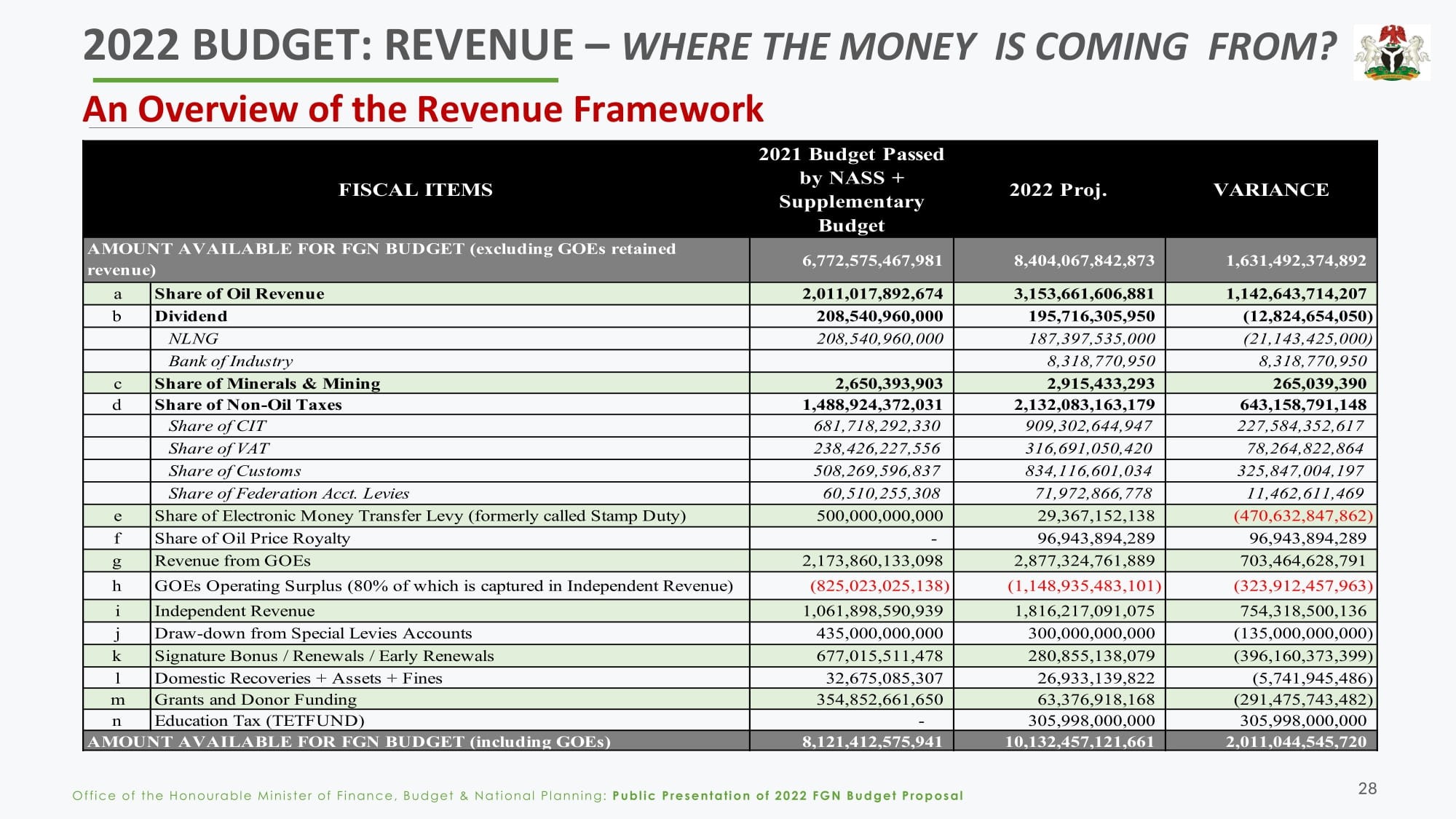 On where the money is going, the Minister said of the aggregate expenditure outlay in the budget, including government-owned enterprises (GOEs) and project-tied loans), 41.7 percent, or about N6.83trillion of the total expenditure of N16.39 trillion, would go to recurrent (non-debt) spending.

Besides, the provision to retire maturing bonds to local contractors/suppliers is
1.79 percent of total expenditure, or about N292.7 billion, in line with the commitment to
offset over a decade accumulated arrears of contractual obligations.

The Minister said other fiscal items provisioning include N350billion for special interventions (recurrent) and N5.35 trillion for capital expenditure. 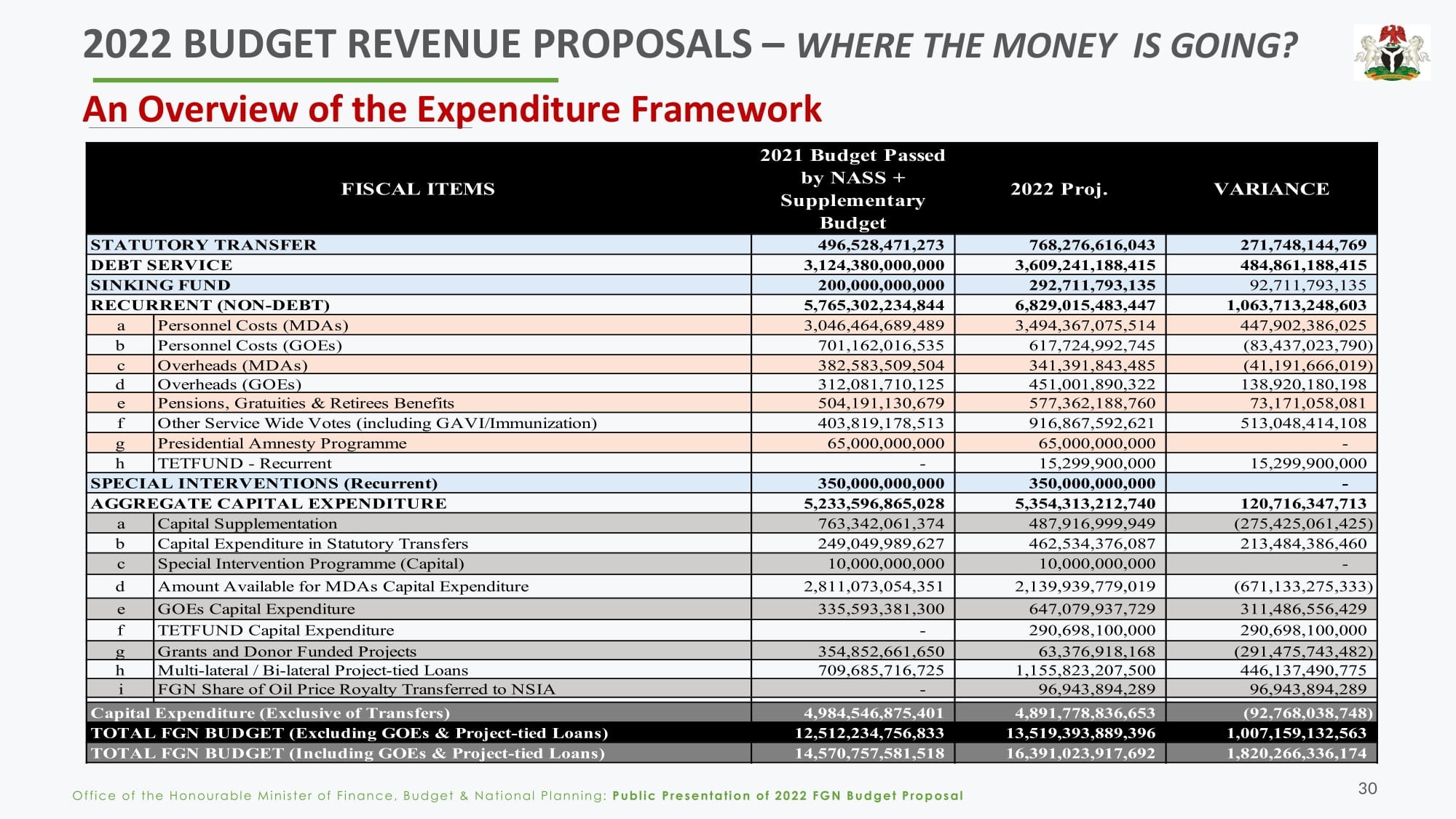 On deficit financing, the Minister said that out of the overall budget deficit of N6.26 trillion, representing 3.39 percent of the gross domestic product (GDP), financing would be mainly by borrowing, split N2.51 trillion each from domestic and external sources in addition to N1.16trillion from multi-lateral/bilateral loan drawdowns as well as N90.7billion from the proceeds of privatization.

On why the 2022-2024 medium-term expenditure framework (MTEF) was revised, the Minister said apart from the projected decrease in government revenue, deductions for federally-funded upstream projects cost, and 13 percent derivation, there was a need to accommodate the decline in the net Federation oil and gas revenue projections.

Despite the decline in Federation Account revenue, the Minister said the Federal Government’s revenue
projection still increased from N8.36 trillion to N10.13 trillion, as a result of projected increase in the retained revenues of GOEs by N837.76 billion and MDAs internally generated revenue by N697.6 billion.

She said the introduction of Education Tax of N306 billion and Dividend of N8.3 billion
from the Bank of Industry as revenue lines as well as the Federal Government share of oil price royalty of N96.9 billion to be transferred to the Nigerian Sovereign Investment Authority in line with the provisions of the Petroleum Industry Act (PIA) necessitated adjustments in the MTEF.

On the expenditure side, the Minister said the increment was necessary to provide for additional critical expenditures, including N100 billion additional provision for the Independent National Electoral Commission (INEC) toward advance preparations for 2023 General Elections; N400 billion for National Poverty Reduction with Growth Strategy, and N178.1 billion for population and housing census scheduled for 2022.